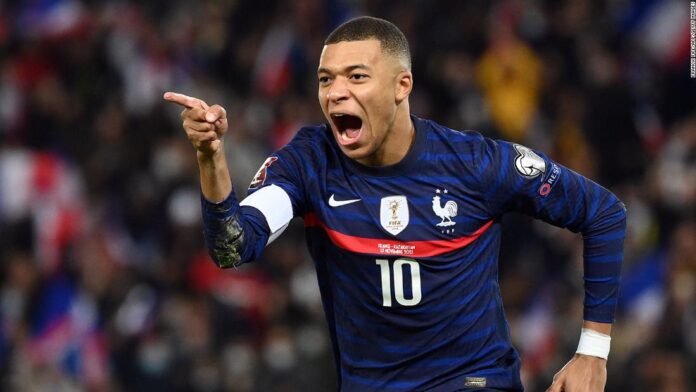 The Paris Saint-Germain superstar completed his first hat-trick for his country within the opening 30 minutes on Saturday night, using his pace and accuracy to dissect a lacking defense.

The 22-year-old scored his fourth late as France booked its spot at the 2022 World Cup in Qatar, with the win guaranteeing it top spot of Group D with one game remaining.

Mbappe’s night of goals was a historic one in scoring for the French national team.

His hat-trick was the first by a France player in a competitive international since Dominique Rocheteau in 1985. And by scoring four goals, he became the first person to do so in a game for France since France legend Just Fontaine in 1958. He’s also just the fourth ever to do it.

After playing such a pivotal role in France’s World Cup win in 2018 in Russia — scoring four goals, including one in the final — Mbappe stressed his teammates’ desire to be able to try and repeat their success.

“We wanted to give ourselves a chance to defend our title,” he said after the 8-0 victory on Saturday.

“Even for those who have played in it and won it, it’s an ultimate dream to play in a World Cup. The fans enjoyed it, so did we. We respected the game and our opponents. We wanted to keep going right to the end.”

Real Madrid striker Karim Benzema, who did not play in 2018, got two goals after halftime, while Adrien Rabiot and Antoine Griezmann grabbed a goal apiece.

Griezmann’s late penalty was his 42nd for his country, moving him past Michel Platini in France’s scoring charts into third all-time, only behind Olivier Giroud and Thierry Henry.

“The aim was to qualify, but we did it in style, too, and you could see the enjoyment the players got from playing together and how they shared things, notably the forwards,” Deschamps told French television.

“It’s good, everyone got their slice of the cake. It’s a result that rewards everything we did well in both halves. The risk at halftime is to drop off a bit, but we continued, that’s also about respecting your opponent.”