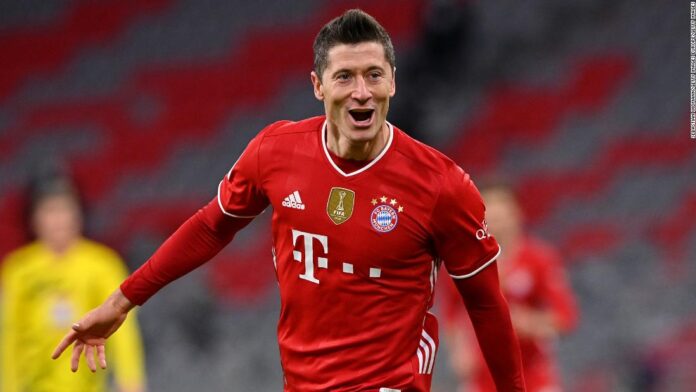 The Poland international is chasing Gerd Muller’s tally of 40 goals in a single Bundesliga season, which has now stood for 49 years.

After his three goals against Dortmund, Lewandowski has now scored 31 goals this season and has 10 league fixtures remaining.

However, despite his ruthless form, the 32-year-old says he’s not thinking about breaking the record.

“First of all I want to win the next game with my team,” the striker said per the Bundesliga. “I want to score the goals, but it’s too early to think about this.”

Muller, who spent much of his career at Bayern, set the current record in the 1971-72 campaign and no one, until Lewandowski, has really come close to matching it.

Bayern’s current hitman looked likely to challenge for it last season but injuries meant he finished the campaign on 34 goals.

‘We deserved the win’

Lewandowski’s hat trick on Saturday inspired Bayern to a stunning comeback against Dortmund which kept his side two points clear of RB Leipzig at the top of the table.

Dortmund, currently languishing in sixth, had raced into a 2-0 lead within the opening 10 minutes courtesy of Erling Haaland, considered by many to be soccer’s new striking superstar.

The Norwegian bagged both of the visitor’s goals but was eventually taught a lesson by his elder.

Lewandowski cut the deficit in half after latching onto the end of Leroy Sane’s cross before equalizing with a smartly converted penalty in the final moment of the first half.

The frantic match began to settle in the second period but a late goal from Leon Goretzka put the hosts in front during a dramatic finale. Lewandowski then wrapped up the tie, and his hat trick, with a sensational strike from the edge of the box in the final minute.

“It is currently the case that if an opponent gets a chance, we get punished,” Bayern coach Hansi Flick told reporters after the match. “But we shook ourselves after 2-0 and showed that we won’t have it taken away from us.”

“We deserved the win in the end because we dominated the game for an hour. The team showed it was awake after going 2-0 down.”

READ: Kylian Mbappe labeled a ‘star for the future’

At the end of last year, Lewandowski was named the men’s player of the year at the Best FIFA Football Awards, fighting off competition from Lionel Messi and Cristiano Ronaldo.

Much of that was down to his performances last season, where he scored 55 goals and fired Bayern to an impressive treble.

He was widely tipped to win the 2020 Ballon d’Or before it was scrapped amid the pandemic.