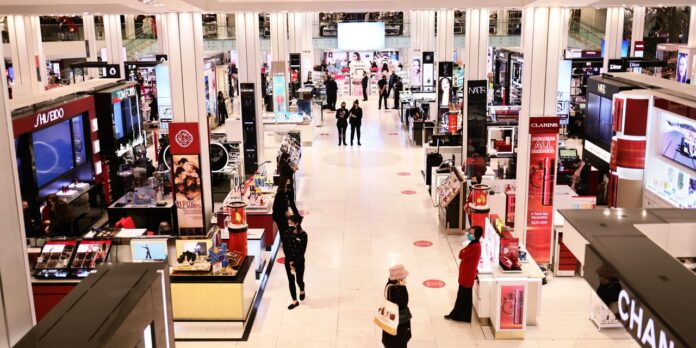 that derive much of their income from shoppers who pay with a store credit card are making room for a less-lucrative customer: buy now, pay later.

The emerging payment option is a modern take on old-fashioned layaway plans, allowing shoppers to pay for purchases over time. The difference is they get the goods upfront. Chains from Macy’s to

For department stores, the new payment plans risk eating into income from store-branded credit-card fees that have helped offset retail sales declines. Moreover, instead of earning a profit from customers who revolve a balance on their store cards, retailers pay fees to the financial-technology companies that offer buy now, pay later plans, including Klarna Bank AB,

Retail executives say they hope the benefits of drawing in new customers outweigh the potential costs as they try to rebound from the crippling effects of the pandemic. But there are risks.

“It’s yet another element of the new retail economy that is working against old-school retailers,” said

Macy’s estimates that credit-card income from store and co-branded cards is expected to account for almost all of its operating income in the current fiscal year. Macy’s sold its credit-card portfolios to Citigroup Inc. in 2005, but it shares profits from the portfolios with Citibank through a joint agreement. Macy’s also owns a bank that provides collection and credit-marketing services.

In October, Macy’s agreed to take a stake in Klarna and offer its buy now, pay later option to customers.

said in an interview that the risks are offset by the new, younger customers that buy now, pay later attracts. He said 40% of shoppers using Klarna are new to Macy’s and 45% are under 40 years old. By contrast, slightly more than a quarter of Macy’s existing customers are under 40.

“Customers, particularly younger ones, were asking for a buy now, pay later option,” Mr. Gennette said. “If we didn’t have it, they might have gone elsewhere.”

Mr. Gennette said the goal is to move these shoppers over time to its store-branded cards, which offer discounts and rewards such as free shipping.

Macy’s signed up fewer new store-branded credit-card customers in 2020, while stores were temporarily closed during the pandemic. But its credit-card revenue increased, mainly from lower write-offs of bad debt.

Shoppers who pay with store-branded credit cards tend to be the most valuable to retailers, ranking ahead of those who use regular credit cards, debit cards, cash or one of the new installment plans. Store cards can typically only be used at a particular retailer, unless they are co-branded with one of the major credit-card providers.

told analysts in November. “We get the most spend from that customer.”

Lillie Shipley only has one credit card, and the 24-year-old marketing executive uses it sparingly for gas and groceries. For other purchases, the Jacksonville, Fla., resident relies on her debit card.

When Ms. Shipley was shopping online for holiday gifts last year, she noticed the Klarna option at checkout and figured it would help her spread out her spending. She paid for cologne for her boyfriend and sweaters for her mom in four biweekly installments.

“Sometimes I see things that I can’t afford, but now I can treat myself,” Ms. Shipley said.

In the past, events like Macy’s Flower Show helped drum up new customers. Today, retailers are turning to Klarna, which is hosting a virtual shopping event Monday and Tuesday in partnership with Cosmopolitan magazine that will include Macy’s, Foot Locker and other chains.

said the firm sent about 45 million customer referrals in December from its app to its retail partners, on par with traffic generated by social-media platforms.

Buy now, pay later providers lay out the money for consumer purchases so that retailers are paid in full upfront. They collect most of their income from merchant fees, which can run double or triple what retailers pay to credit-card processors, according to industry executives. Late fees from consumers accounted for less than 9% of Afterpay’s income in its most recent quarter.

While still fairly new in the U.S., buy now, pay later options are expected to grow to 4.5% of North American e-commerce payments by 2024 from 1.6% in 2020, according to Worldpay Group Inc., a payment-processing company.

Roughly one in five millennials used a buy now, pay later service in 2020, about double the rate of Gen X. Among baby boomers, the use was almost nonexistent, according to Cornerstone Advisors of Arizona LLC, a financial consulting firm.

Historically, buy now, pay later had been used to spread out the cost of large purchases. But in the past year, a greater number of consumers have used it for items costing $500 or less, said Ron Shevlin, Cornerstone’s research director.

“In 2020, when the economy was uncertain and people lost jobs, consumers said, ‘I want these jeans, but I want to impose control over how much I spend each month,’ ” he said.

Only 52% of Generation Z customers, ages 18 to 23, have at least one credit card, although the rate increases as they age, compared with 83% of Boomers who do, according to CreditCards.com, a website that compares credit-card offers.

The 2010 Card Act made it harder to get a credit card before age 21. Young adults also tend to have more student debt.

Marcus LaRobardiere of Boston recently used Klarna and Affirm to buy a desk for his wife and jewelry for his mom. “It’s a better alternative to racking up interest fees with a credit card,” said the 31-year-old, who handles marketing for a software company.

Buy now, pay later customers can still run up fees. For instance, Klarna charges a late fee of up to $7, which is capped at 25% of the total purchase price, after the second missed payment. The delinquent amount is added to the next scheduled payment, and the user can’t make a purchase until the balance is paid.

Nearly 40% of U.S. consumers who used buy now, pay later missed more than one payment, and 72% had their credit score dinged, according to a survey conducted in November by Credit Karma, which counsels consumers on how to use and apply for credit cards, loans and other financial services.

“Buy now, pay later comes with a lot of convenience,” said Gannesh Bharadhwaj, general manager of Credit Karma’s credit cards business. “It makes it so easy that people tend to over buy.”

Write to Suzanne Kapner at Suzanne.Kapner@wsj.com