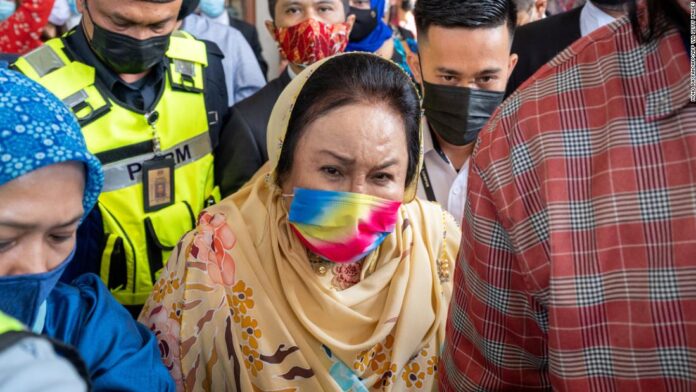 The Kuala Lumpur high court ruled the prosecution had proved sufficient grounds for the case to proceed.

“This is my finding that the prosecution has produced credible evidence to prove every element of the offense… I now call upon the accused to enter a defense,” judge Mohamed Zaini Mazlan said in his ruling.

Rosmah, who wore a traditional Malay dress with a shawl covering her head, told the court she would testify under oath during defense proceedings.

Her lawyer, Jagjit Singh, said after the hearing the defense would be “hampered to a certain extent” because the judge did not explain the factors behind his decision, adding that this had caused his client emotional distress.

“We had to comfort her a little bit. We just told her to go back to her house and remove all the stress that has gone through here,” Jagjit told reporters.

Rosmah was earlier accompanied by Najib, who had to leave midway through her hearing to attend to his own court case.

Of that total, prosecutors accuse Rosmah of arranging for 187 million ringgit ($46.22 million) to be paid as a political donation to Najib, while also receiving two bribes of 6.5 million ($1.6 million) ringgit.

If found guilty, she could be jailed for up to 20 years and fined at least five times the sum specified in the charges.

In July, Najib was found guilty of corruption and sentenced to 12 years in jail in the first of several trials linked to a multi-billion-dollar scandal at state fund 1Malaysia Development Berhad (1MDB). He has since filed an appeal against the decision.

The couple deny any wrongdoing, saying the charges are politically motivated.