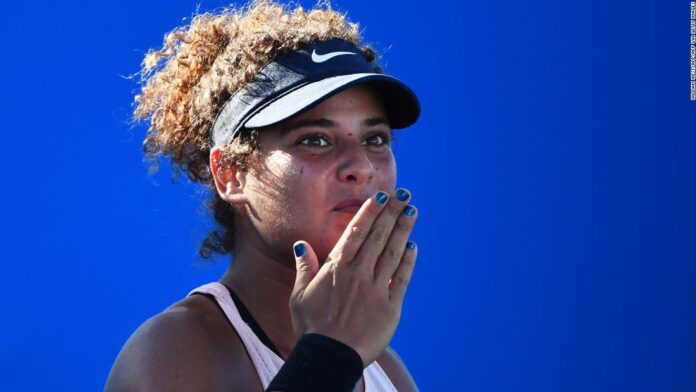 Sherif defeated France’s Chloe Paquet 7-5, 7-5 at the Australian Open to secure the landmark victory, setting up a second-round match against Slovenia’s Kaja Juvan.

Ranked 131st in the world, Sherif made her grand slam debut at last year’s French Open when she was eliminated in the first round with a three-set defeat by Karolina Pliskova. She reached the Australian Open main draw after progressing through last month’s qualifying tournament in Dubai.

“Obviously, it means a lot because finally this is a barrier that I had to pass, a mental barrier,” said 24-year-old Sherif.

“With the conditions that are here, it was very, very tough to adapt to it, especially to adapt my game, it took us a while.

“The courts are faster, the heat, everything happens so fast, it’s very tough to control the ball. But very, very happy with my accomplishment and I’m going for more.”

Sherif broke Paquet to love in the 11th game of the match before wrapping up the first set with a well-struck forehand the following game.

She broke for a 6-5 lead again in the second set and sealed the win soon after with an ace, much to the delight of the corner of Egyptian fans in the stands.

“It’s always so nice to go back home, I get a lot of support,” said Sherif, who trains in Spain.

“Even being here in Melbourne, the people were going crazy on the court today.

Juvan, Sherif’s next opponent, reached the second round after Johanna Konta retired through injury.

As Aston Martin are welcomed back to F1, Sebastian Vettel admits he almost walked away from the sport