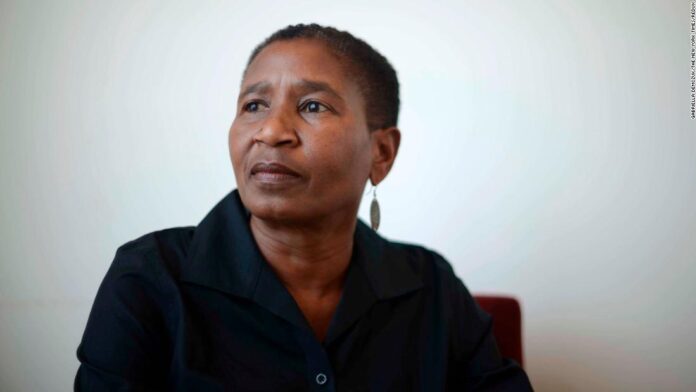 “We weren’t supposed to be here; the odds were stacked against us,” he said. Choking back his own tears, Durant described the hardships that he and his older brother had endured with their young, single mom.

“You put clothes on our backs, food on the table. When you didn’t eat, you made sure we ate. You went to sleep hungry; you sacrificed for us.”

Keeping them in line

A few months later, the NBA players made a historic decision. By an overwhelming of 32 to 4, Michele Roberts was elected to become the first woman to head the players’ union, the National Basketball Players Association (NBPA).

“It’s a very long story because I’m an old lady,” quipped Roberts in an interview with CNN Sport. She confirms that her appointment was historic but also argues that it shouldn’t have seemed that unusual in a league that’s roughly 80% Black.

“I don’t know what percentage of those men have essentially had their lives saved by Black women,” she ponders, “but a good number of them. Black women, who were the sole caretakers.

“So, for the men I work for, the notion of a Black woman being both competent and able to move mountains is something that they grew up believing in,” added Roberts, referring to the importance of maternal influence on many NBA players.

“They had no doubt about me … so I actually pushed back on the notion that there’s something odd and crazy, ‘Wow! A Black woman being the executive director of the NBPA.'”

Roberts also learned her life lessons from a strong, independent, single mother. Growing up in a housing project in The Bronx, New York, she remembers the nurturing examples that set her up for a successful life.

“She didn’t seem to believe there was something I could not do simply because I was Black,” Roberts recalled, “I understood that there were going to be obstacles, but she never allowed me, and I never allowed myself, to believe that I shouldn’t try.”

After decades working as a public defender and then as a corporate attorney, Roberts took a leap of faith into the world of professional sports where she is now considered one of the most influential women.

At the time, 2017’s pivotal contract negotiations were known to be on the horizon; what was yet unseen was the impact that police brutality and the deaths of Breonna Taylor and George Floyd would have and that a global pandemic would present the league and its players with the biggest logistical challenge faced in 74 years.

“Historically, our players have been active,” Roberts said, noting that many of the league’s athletes would have grown up hearing stories of their grandparents being denied the right to vote.

“These are not guys who hear the term ‘police brutality’ and say ‘what are you talking about?’ But certainly, in the last 18 months, the temperature has gone up and their activism has shot up as well

“They’ve got a tradition of resistance that they can be proud of,” Roberts continued. “One of the reasons I love so much working for the NBPA members is because it’s a rich tradition and one they do not flinch from.”

There might have been a time when the players’ rep would have urged caution on activity that could rock the boat, that could have jeopardized a valuable contract in the prime of their working lives. But Roberts knows that time has passed; as the sport has evolved, the value of the athlete has only increased.

Roberts believes that the advent of social media has been a game-changer for the players.

“Social media reminds anyone who doesn’t know just how popular they are. They are in a position that perhaps players in the past were not — to be able to exercise their power without fear of suddenly having their brands destroyed, or their careers destroyed, by unhappy team owners.”

In an interview with The New York Times last September, Roberts referred to the racial awakening after the high-profile 2020 police killings of Floyd and Taylor. “The world right now is on fire,” she said.

When the Milwaukee Bucks made the emotional decision not to take the court for Game 5 of the playoffs, there was a hotline between the locker room and the NBPA, with Roberts counselling the players on the other end of that line.

The movement spearheaded by Lebron James to encourage voter registration, “More than a Vote,” and the new campaign to fight back against sweeping Republican efforts to suppress the vote in minority communities, “Protect our Power,” have the full support of the NBPA, says Roberts.

“I do recall an age in sports when there was a level of agnosticism,” Roberts explained to CNN. “All of this stuff you see happening are events that these men have themselves initiated. I have immense pride that they do appreciate there is a difference that they can make.”

The relationship between Roberts and the players is naturally professional, but one can sense an element of maternal pride in the way she speaks about them.

“Maybe it’s maternal, maybe it’s not,” she demurs. “I will support them and their economic and professional development; I think that’s what parents do. But I don’t deny that I have, on occasion, said ‘Oh come on baby!’ And I know it’s because I feel a little bit like a grandma 20% of the time.”

In March of 2020, Roberts expressed her intention to step down from her role as executive director of the NBPA, but days later, the pandemic exploded and the league shut down; now she seems to be working as hard as ever.

“I have had different jobs and I’ve enjoyed just about all of them,” she says, “But I’ve never been prouder of the people I work for as I am with these men.”

It doesn’t sound like the players are keen to see her leave, so how does she think they feel about her? “They don’t call me up to say, ‘Hi, I love you!'” she laughs.

“They could fire me, and they haven’t; I guess that’s one sign. I was very hard on my staff and I have worked very hard to demonstrate our commitment to their well-being and their best interests. I believe we succeeded.”

Despite her own considerable success, Roberts admits that she hasn’t always found it easy to believe in herself, a nagging sense that — as a Black woman – she wasn’t getting the respect she deserved.

“They presuppose a certain amount of incompetence,” she recalled. So one day, she gave herself a little pep talk, “‘You need to stop whining. Do you want to wake up and be a White man in the morning?’ And of course, the answer was no.”

But when Lebron James paraphrased Malcolm X, tweeting, “The most DISRESPECTED person on earth is THE BLACK WOMAN!” last year, it resonated with Roberts.

“I said, ‘Got that right.’ Needless to say, he was preaching to the choir. I can guarantee you there’s very little disagreement within the community about the truth of that statement, something I’ve always understood to be true, something I hope will change.”

But as many of the NBA players lead by example, representing their communities and changing the world around them, so too does Roberts.

“My journey is that of many people who come from backgrounds like mine, who have worked very hard and believed and benefited from the struggles of people that came before us,” she reflected.

“It’s been a long journey, but not one that I look back on with any regret.”