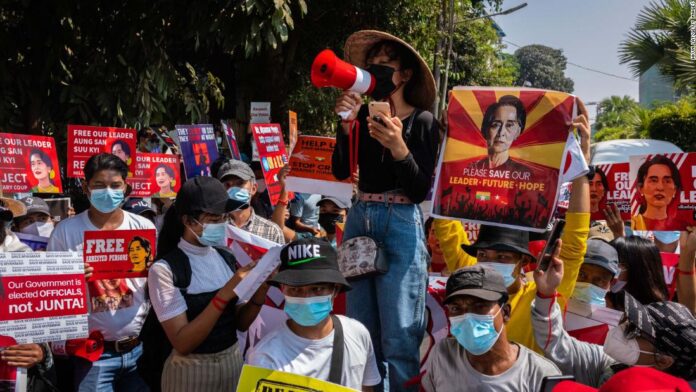 Suu Kyi’s lawyer Khin Maung Zaw told CNN that she had been charged in relation to a national disaster law, in addition to the earlier count under the country’s import and export act. She appeared in a court hearing via video conference on Tuesday, according to Zaw.

Suu Kyi was the country’s de facto civilian leader before being deposed and detained on February 1. At the time, she was charged for breaching import-export laws, which has been described as “trumped up.”

Her detention was due to expire Monday, but she will remain in custody until her next court hearing on March 1. Zaw hopes to file an application for her to be released on bail after he is officially approved as her legal representation at the next hearing.

In a Tuesday news conference, Brig. Gen. Zaw Min Tun, spokesman for the ruling council, reinforced what he said was the military’s intent to hold elections “and hand power to the winning party.” The military has yet to provide an election date, but it has declared a state of emergency that will last for one year.

Suu Kyi’s party, the NLD, claimed an overwhelming victory in elections in November, taking 83% of the vote, which granted it another five years in government.

Zaw Min Tun described the protests since the takeover as unlawful, accusing protesters of attacking police and “behaving as terrorists.”

He added that Suu Kyi and President Myint Swe, who is also detained, are “in good health.”

Hundreds of thousands of people have joined protests and civil disobedience campaigns in the wake of the coup. People have been seen on the streets in Yangon, Dawei and Myitkyina holding “Civil Disobedience Movement” signs and “Free our leader” banners featuring pictures of Suu Kyi.

The demonstrations have swelled to include people from all sections of society, including a strike by government workers as part of a mass civil disobedience movement.

The military in turn has escalated its crackdown. On Sunday, security forces in the country’s northern Kachin state fired on protesters at a power plant.

In Mandalay, a demonstrator told CNN he saw uniformed security forces firing rubber bullets and using slingshots in the direction of a crowd of peaceful protesters, causing them to flee. CNN has attempted to reach out to the military for a response.

The military has also sought to limit access to the internet and news services, as well as floating a potential new cyber security law that observers fear could further limit the flow of information.

Internet and mobile services were disrupted for the second night in a row on Monday, internet monitoring NGO NetBlocks said Monday. National internet connectivity fell to 15% of ordinary levels as of 1 a.m. local time, similar to the levels seen on Sunday evening, which has prompted some to speculate if a night-time internet ban will become a daily occurrence in the country.

But fear of authorities using force have not stopped the demonstrations. Anti-coup protesters occupied railway lines in Mawlamyine and Myanmar’s largest city Yangon on Tuesday while chanting slogans in an effort to disrupt train services as part of a country-wide civil disobedience movement.

Western diplomats on Sunday warned Myanmar’s junta that “the world is watching” and advised the military not to use violence against protesters.

“We call on security forces to refrain from violence against demonstrators and civilians, who are protesting the overthrow of their legitimate government,” read a joint statement signed by the US, Canada, and the European Union that was published on the official Facebook pages of their embassies.

The UN Special Envoy on Myanmar called on the country’s military leadership “to refrain from violence and fully respect human rights, fundamental freedoms and the rule of law,” according to a statement released Tuesday.