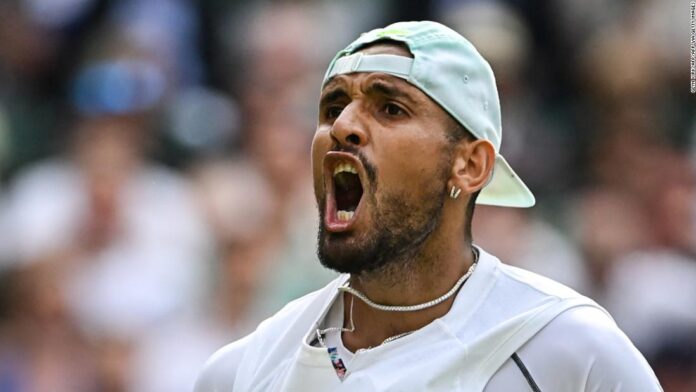 After a fiery match against Stefanos Tsitsipas on Saturday, during which Kyrgios called for his opponent to be defaulted for hitting a ball into the crowd, this was a more subdued performance from the Australian, who has equaled his best ever performance at Wimbledon by reaching the quarterfinals.

It was only when he put away a forehand volley on his first match point in the fifth set that Kyrgios showed real signs of emotion — looking to the crowd and roaring in delight.

The victory was hard-fought, too, as Kyrgios appeared to be struggling with a shoulder problem throughout the match and needed treatment from the physio at 3-2 in the third set.

“I need a glass of wine for sure tonight,” he admitted in his on-court interview after the match.

Next up for Kyrgios is Chile’s Cristian Garin, who became the first man at this year’s tournament to come back from two sets as he defeated Australian Alex de Minaur.

Kyrgios has now reached his first grand slam quarterfinal in seven years and remains unbeaten in all six of his five-set encounters at Wimbledon.

“I’ve never lost a five-set match here — that’s what I was thinking about,” he said. “I’ve been here before, I’ve done it before, and I’ve done it again.”

American Nakashima, playing in his first fourth-round match at a grand slam, claimed the first set with the first break point of the match, but Kyrgios, despite clutching his shoulder a number of times, hit back with a break at the start of the second.

The 27-year-old’s serve proved to be his best weapon, with one ace clocking 137 miles per hour as he served out the set and leveled the match.

There were few opportunities for either player to break in the third set, but Kyrgios gained the upper hand in the tie break, slapping a cross-court forehand beyond Nakashima’s reach to move ahead in the match.

The 20-year-old Nakashima, however, was far from done and broke for a 4-3 lead in the fourth. What followed was a bizarre passage of play in which Kyrgios appeared to tank the remainder of the set with slow serves and lackluster ground shots.

It meant the match went to a decider, only for Kyrgios to produce some of his best tennis and set up the victory with a double break.

He will now play his second Wimbledon quarterfinal and first since 2014; back then, he famously defeated Rafael Nadal in the fourth round as a 19-year-old debutant.

His performance on Monday may not have carried the same infectious, pulsating energy as his victory against Nadal, but it was a gutsy victory nonetheless.

“It wasn’t anywhere near my best performance level-wise, but I’m super happy to get through,” said Kyrgios. “I fought really hard today.”