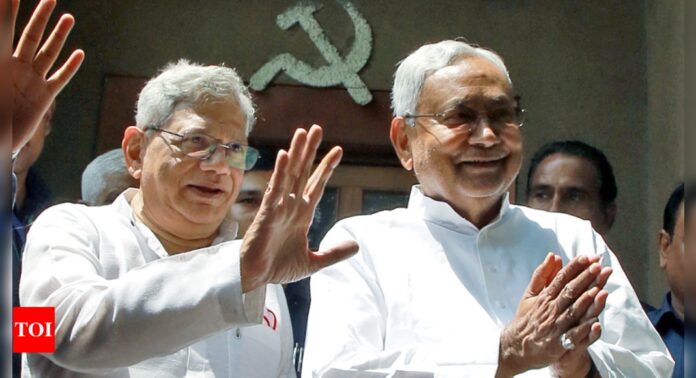 NEW DELHI: Bihar chief minister Nitish Kumar on the second day of his trip to Delhi continued meetings with opposition leaders- part of his effort to forge an opposition unity to take on the BJP in 2024 Lok Sabha polls.
He first met Left leaders on Tuesday morning- Sitaram Yechury of CPM and D Raja of CPI at their respective party offices.
Kumar’s return to the opposition fold and his desire to be part of a fight against the BJP is a great signal for Indian politics, Yechury said after the meeting.
Nitish Kumar later met Delhi CM Arvind Kejriwal. Other Aam Aadmi Party leaders including deputy CM Manish Sisodia were also present.
“Discussion was held on many serious issues related to the country like education, health, ‘operation lotus’, open horse-trading of MLAs to topple popularly elected governments,” Kejriwal wrote in a tweet following the meeting.

Kumar also met former Haryana CM and INLD leader Om Prakash Chautala at his Gurugram residence. He assured Chautala of his presence at INLD’s September 25 rally in Haryana, along with Bihar coalition leader Tejashwi Yadav.
He is also expected to meet Samajwadi Party’s Mulayam Singh Yadav
Kumar’s Delhi trip comes close on the heels of his party JD(U) ending its coalition with BJP in Bihar. The move saw the fall of the NDA government but Nitish returned as CM as head of the new government with RJD, Congress, Left parties and HAM.

Kumar arrived in Delhi on Monday. He met Rahul Gandhi of Congress and former Karnataka CM HD Kumaraswamy of JDS on Monday itself.
He is also being tipped as the likely opposition PM face for 2024, but Kumar himself rubbished such speculations.
“This is wrong. I am not a claimant for the post, nor am I desirous of it,” he said.