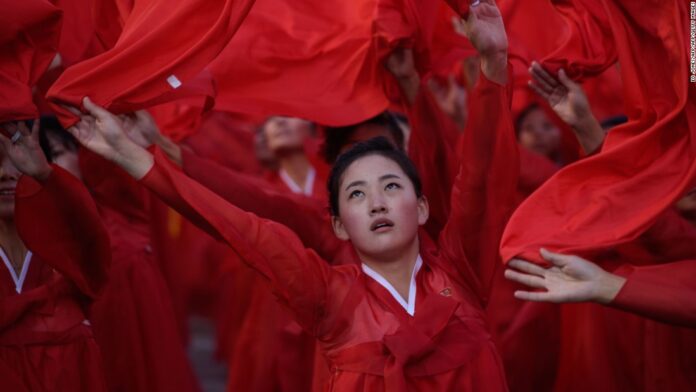 Ethnic Groups: Racially homogenous, with a small Chinese community and a few ethnic Japanese
Religion: Traditionally Buddhist and Confucianist, with some Christian and syncretic Chondogyo (Religion of the Heavenly Way

North Korea has no diplomatic representation in the United States. They do have a permanent mission to the United Nations.

August 1945 – After Japan surrenders in World War II, the United States occupies the southern half of the peninsula while the USSR occupies the northern half.

1948 – Separate governments for the northern and southern parts of the Korean peninsula are established after an international stalemate fails to resolve the issue.

2000 – Kim Dae Jung, the leader of South Korea, and Kim Jong Il meet for the first time since the country was separated 50 years earlier.

December 11, 2007 – Freight trains begin crossing the border between North and South Korea, resuming a regular service that last ran in the 1950s.

March 3, 2008 – After the United States and South Korea begin six days of joint military exercises, North Korea’s foreign minister denounces the exercises and warns that North Korea will explore all countermeasures necessary for its protection. Approximately 27,000 US troops and the aircraft carrier USS Nimitz take part in the exercises.

December 28, 2008 – The freight trains that began crossing between the border of North and South Korea in December 2007 suspend service due to souring relations between the two countries, dashing hopes of reconciliation.

June 8, 2009 – The state-run media reports that US journalists Laura Ling and Euna Lee, accused of spying, have been sentenced to 12 years in a labor prison.
August 4, 2009 – Former US President Bill Clinton sits down with Kim Jong Il to discuss the release of Lee and Ling. Both women are later given a full pardon from Kim and released.

May 20, 2010 – South Korea formally accuses North Korea of firing a torpedo to sink the Cheonan, a South Korean Navy ship, in March, killing 46 sailors. North Korea denies responsibility and warns that any retaliation would lead to “all-out war.”

September 28-29, 2010 – North Korea’s ruling party, the Workers’ Party of Korea, meets for the first time since 1980. Kim is reelected as general secretary of the party.

February 7-9, 2011 – Military officials from both North and South Korea meet at the demilitarized zone (DMZ) on the border to defuse tensions and restart international aid talks without much success.

April 29, 2011 – The US State Department refutes charges by former US President Jimmy Carter that the United States and South Korea are withholding food aid from North Korea for political motives. The United States had suspended aid two years ago to North Korea, because it suspected the donated food was not reaching those most in need.

January 24, 2013 – North Korea’s National Defense Commission says it will continue nuclear testing and long-range rocket launches, all of which are a part of an “upcoming all-out action” aimed at the United States, “the sworn enemy of the Korean people.”

March 11, 2013 – A spokesman for the North Korean military announces the 1953 armistice agreement is being “scrapped,” citing US-led international moves to impose new sanctions against it over its recent nuclear test.

March 27, 2013 – North Korea cuts its military hotline with South Korea. Earlier in the month a Red Cross hotline through Panmunjom is cut.

December 13, 2013 – Kim Jong Un’s uncle, Jang Song Thaek, is executed. Jang had once been considered the second-most powerful person in the country. North Korea’s official news agency accuses Jang of trying to overthrow the state, describing him as “despicable human scum.”
February 17, 2014 – The UN Commission of Inquiry on Human Rights publishes a report on widespread human rights abuses in North Korea.
March 9, 2014 – Elections are held. State media reports there is 100% voter turnout, and Kim receives 100% of the vote.
December 19, 2014 – The FBI says it has concluded the North Korean government is responsible for a cyberattack on Sony Pictures. In November, hackers broke into Sony’s servers, published private emails and information and threatened to attack movie theaters screening “The Interview,” a comedy about an assassination plot on Kim.

March 11, 2015 – The Russian Foreign Ministry announces an agreement that 2015 will be a “Year of Friendship” between the two countries and that Kim will visit Moscow.