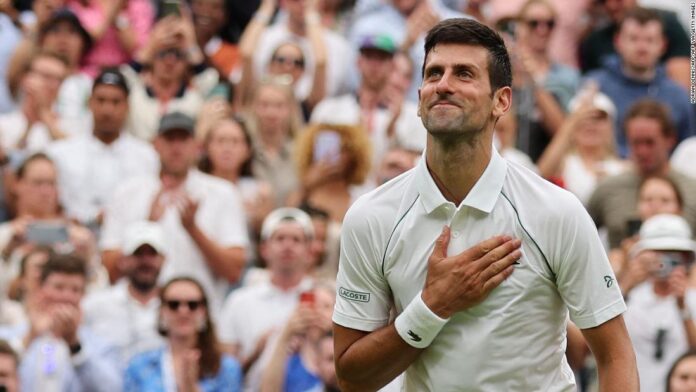 On the first day of action at Wimbledon, Djokovic opened play under the roof of Centre Court in a bid to win his fourth straight title at SW19 and first grand slam of the year.

The top seed’s victory against Kwon was perhaps not as routine as some expected. First, he came from a break down in the opening set, then Kwon leveled the match by taking the second.

Djokovic began to find his rhythm towards the end of the third set and completed the win after securing a break midway through the fourth — shortly after he had saved three break points on his own serve.

The victory made it 22 wins in a row at Wimbledon for Djokovic — a run that stretches back to the 2017 quarterfinals — as well as his 80th at the tournament.

“Credit to Kwon for playing some really high quality tennis, he deserves some applause,” said Djokovic. “If he had broken me in the third set, this match could have gone a different way.”

Kwon came out firing in Monday’s first-round match and swatted a big, inside-out forehand to move a break ahead early in the first set.

The slender lead was short-lived as Djokovic hit back with a double break of his own to wrap up the set, but his Korean opponent continued to apply the pressure in the second with a mix of powerful baseline hitting and delicate drop shots.

Kwon moved into a 3-1 lead in the second set and then saved three break points the next game to deny Djokovic a break of his own — an advantage that enabled him to take the set and level the match.

The sounds of rain lashing against the roof and the occasional rumble of thunder could be heard from inside Centre Court at the start of the third set, muffling the cheers of the crowd and the noise of racket against ball.

READ: Jodie Burrage comes to the aid of an unwell ball boy with sweets during first round match

The pair traded service games before Djokovic showed his experience to take hold of the match. The Serbian’s first serve became more consistent and his ground strokes more precise as he broke for a 5-3 lead. A series of big serves — including two aces — helped him take the following game and the third set.

In the fourth, Djokovic saved three break points at 2-2 before securing a break of his own at 3-2. From here, Kwon couldn’t find a way back and Djokovic got his pursuit for a 21st grand slam title up and running, with either Australia’s Thanasi Kokkinakis or Poland’s Kamil Majchrzak awaiting in the second round.

With the victory, he also made a small piece of tennis history as the first player to win at least 80 matches at each of the four grand slams.