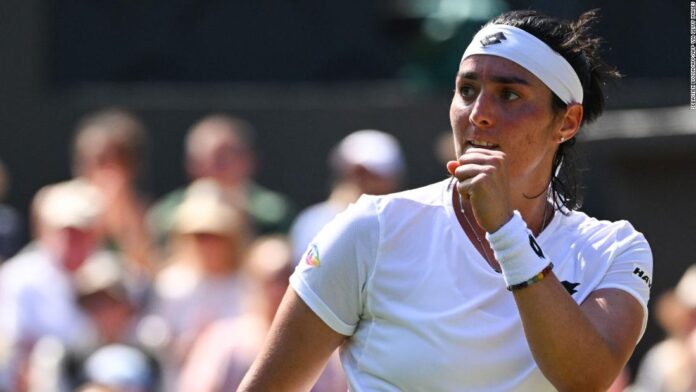 Tunisia’s Jabeur had already made history at this year’s Wimbledon as the first Arab or North African woman to compete in the semifinals of a grand slam, and she went a step further with a battling victory against Maria.

The third seed, who has only dropped two sets in the tournament, breezed through the first set after securing a double break of serve, but Maria used her slice to good effect and responded with a break to take the second set.

With the match level, Jabeur gained the upper hand with a break at the start of the third set, then followed it up with another at 3-0 as Maria sent a simple forehand volley long.

From there, the match was all but sewn up, and Jabeur completed the victory on her second of three match points after Maria returned into the net.

“I’m a proud Tunisian woman standing here today,” Jabeur, who will face Elena Rybakina in the final on Saturday, said in her on-court interview, “and I know in Tunisia they’re going crazy right now.

“I just try to inspire really as much as I can. I want to see more and more, not just Tunisian, but Arab and African players on tour. I just love the game and I want to share this experience with them.”

Jabeur and Maria are close friends and shared a long embrace at the net at the end of the match. As the crowd applauded the two players, Jabeur dragged Maria back onto the court and gestured for the crowd to cheer her opponent.

The German has enjoyed the best grand slam tournament of her career at Wimbledon just 15 months after giving birth to her second child.

She is just the sixth woman aged 34 or over to play in a grand slam semifinal, following in the footsteps of Venus and Serena Williams, Martina Navratilova, Chris Evert and Billie Jean King.

READ: Three Wimbledon security guards arrested for alleged fight amongst each other

“She has to make me a barbecue now to make up for all the running that I did,” Jabeur joked after the match.

“I definitely wanted to share the moment with her at the end because she’s such an inspiration for so many players, including me. Coming back after having two babies — I can’t believe how she did it.”

Jabeur had never made it past the quarterfinals of a grand slam prior to this year’s tournament, but she has been in the form of her life this season, rising to an all-time high of No. 2 in the world rankings.

Last year, she made history as the first Arab player — male or female — to break into the top 10 in the singles rankings.

It will be 23-year-old Rybakina’s first major final as she becomes the youngest women’s singles finalist at Wimbledon since Garbine Muguruza in 2015.

“I don’t know how to describe it, it was really good, today I was mentally prepared and did everything I could and it was an amazing match,” Rybakina, the first player representing Kazakhstan to reach a final at Wimbledon, said in her post-match interview.

Halep, meanwhile, will be disappointed to have not capitalized on her strong form having not dropped a set in the tournament prior to Thursday’s match.