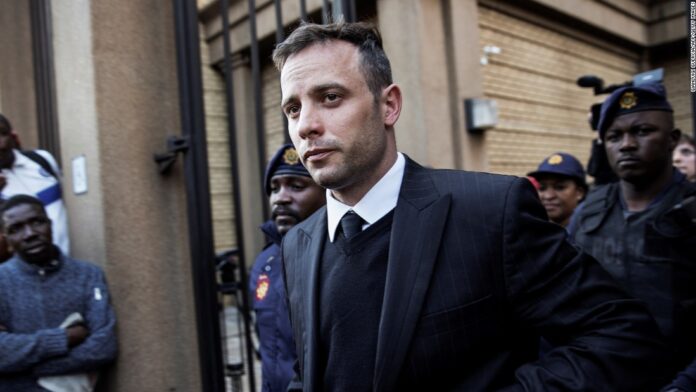 Pistorius must first participate in “Restorative Justice” to be eligible for release, the Department of Correctional Services (DCD) confirmed to CNN on Tuesday.

Pistorius killed Steenkamp at his home in an upscale Pretoria neighborhood in the early hours of February 14, 2013 — a killing he says was an accident after he mistook her for an intruder, but one the prosecution called a deliberate act after the two had an argument.

Pistorius was originally convicted of manslaughter in 2014 after months of hearings and sentenced to five years, but a higher court overturned the conviction and changed it to murder a year later.

The judge described Pistorius as a “fallen hero” who will never be at peace and sentenced him to six years in prison.

However, in 2017, a South African high court more than doubled Pistorius’ sentence for Steenkamp’s killing.

The Supreme Court of Appeal increased his sentence to 13 years and five months for the murder of Steenkamp. It issued the ruling after the prosecution appealed his previous sentence of six years as too lenient.

Before an offender can be considered for parole placement, he or she must participate “in programs aimed at preparing them for a crime-free life beyond incarceration,” including Restorative Justice, where offenders are able to acknowledge and take responsibility for their actions, Nxumalo’s statement read.

The process is aimed to “create an opportunity for parties to reconcile” or apologize for their actions.

“It was therefore necessary that the Steenkamp family is approached and this was done with utmost care as the victims must be prepared before they participate in the Victim-Offender-Dialogue (VOD),” the statement read.

As offender Pistorius is incarcerated in Gauteng and the Steenkamp family residing in another province, the DCS has to work out logistical arrangements.

“This necessitated a deferral as we are finalizing the modalities which will ensure that all relevant parties are well prepared, and ready to participate in a conducive environment,” the DCS said.

Tania Koen, the Steenkamps’ lawyer, told South African broadcaster SABC in a video posted on Saturday that Reeva’s parents “confirmed they would like to participate in the victim-offender dialogue.”

“The wound, even though so much time has passed, is still very raw,” Koen said. “Every day is a difficult day for them.”

“June [Reeva’s mother] has always said that she has forgiven Oscar, however that doesn’t mean that he mustn’t pay for what he has done,” Koen said.

“So forgiveness is not an issue for June … Barry [Reeva’s father] battles with that a bit, but that is something he will have to voice at the appropriate time.”

CNN’s Nicole Chavez and Sean Coppack contributed to this report.