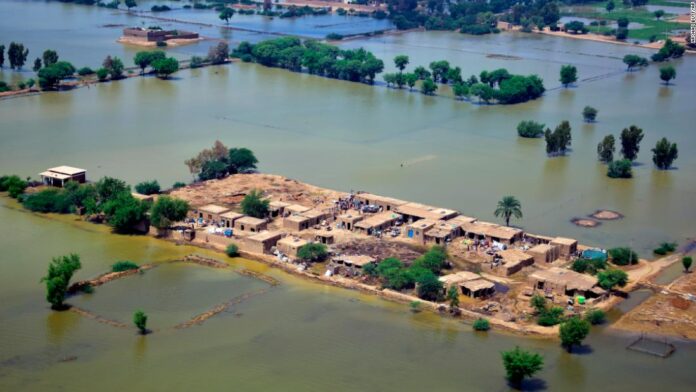 The cumulative number of deaths since June 14 rose to 1,282 on Saturday, the country’s National Disaster Management Authority reported, and almost a third of the victims are children. On Saturday alone there were a further 57 deaths, 25 of them children.

Aid agencies warn the country’s woes are far from over — and that as the disaster continues to unfold children will be among the most vulnerable.

The flooding — the result of a combination of record monsoon rains and melting glaciers in Pakistan’s northern mountains — has been described as the worst the country has ever seen.

At one point more than a third of the country was underwater, according to satellite images from the European Space Agency, and government and aid organizations say 33 million people have been affected.

Among them, more than three million children are in need of urgent humanitarian assistance due to the risk of waterborne diseases, drowning and malnutrition, according to UNICEF. The floods have also damaged or destroyed 17,566 schools nationwide, UNICEF says, further jeopardizing children’s education after two years of Covid-related closures.

Aid agencies say even if the flooding recedes the country faces a long road to recovery.

“Survivors must start from scratch,” said Aurelie Godet, a spokesperson for Medecins du Monde, a humanitarian aid organization that has worked in Pakistan since 1966.

“This will not be over in two months, they need long-term aid.”

The two worst-affected provinces are Balochistan and Sindh, in southern Pakistan, where infrastructure and water systems have been damaged.

Calling for aid from the international community, Pakistan’s Prime Minister Shehbaz Sharif estimated last week the calamity had caused more than $10 billion in damage to infrastructure, homes and farms.

A National Flood Response and Coordination Center has been set up and the World Health Organization has released $10 million to treat the injured, deliver supplies to health facilities, and prevent the spread of infectious diseases. China and the UK have also pledged millions in aid to the country.
More than 1 million homes have been damaged or destroyed, while at least 5,000 kilometers of roads have been damaged, according to the disaster management authority.