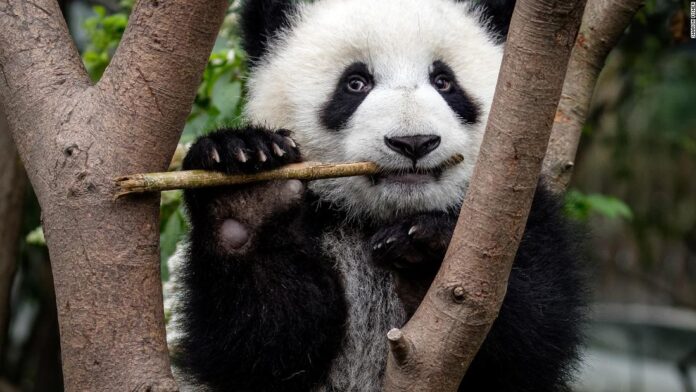 But their ancestors, like most bears, ate a much wider diet that included meat, and it was thought that modern pandas’ exclusive diet evolved relatively recently. However, a new study finds that pandas’ particular passion for bamboo may have originated at least 6 million years ago — possibly due to the plant’s wide, year-round availability.

To survive solely on low-nutrient bamboo, modern pandas (Ailuropoda melanoleuca) have developed a peculiar sixth finger, a thumb of sorts that allows them to easily grasp bamboo stalks and strip the leaves.

“Tightly holding bamboo stems in order to crush them into bite sizes is perhaps the most crucial adaptation to consuming a prodigious quantity of bamboo,” said study author Xiaoming Wang, curator of vertebrate paleontology at the Natural History Museum of Los Angeles County, in a statement.

Wang and his team identified much earlier proof of pandas having an extra finger — and thus an all-bamboo diet — in the form of a fossilized digit dating back 6 to 7 million years. The fossil, unearthed in Yunnan Province in southwest China, belonged to a panda ancestor known as Ailurarctos.

The new research published Thursday in the journal Scientific Reports.

While the giant panda’s sixth digit is not as elegant or dexterous as human thumbs, the persistence of this “distinctive morphology” over millions of years suggested that it plays an essential function for survival, the study noted.

But what was particularly puzzling to the scientists involved in the study was that this fossilized structure was longer than those of modern giant pandas, which have a shorter, hooked sixth finger.

Wang and his colleagues think modern pandas’ shorter sixth digit is an evolutionary compromise between the need to manipulate bamboo and the need to walk and carry their hefty bodies.

“Five to six million years should be enough time for the panda to develop longer false thumbs, but it seems that the evolutionary pressure of needing to travel and bear its weight kept the ‘thumb’ short — strong enough to be useful without being big enough to get in the way,” said study coauthor Denise Su, an associate professor at the School of Human Evolution and Social Change and research scientist at the Institute of Human Origins at Arizona State University, in a statement.