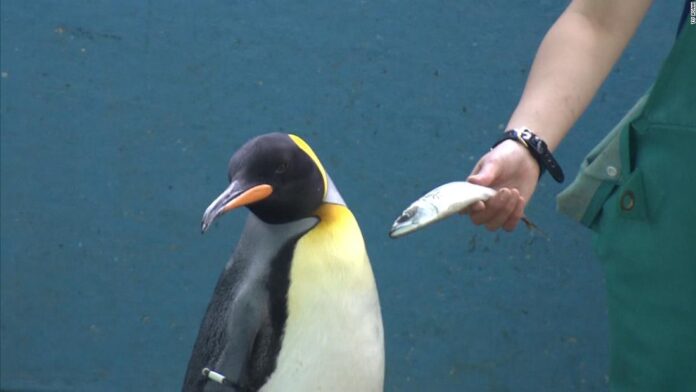 (CNN) — An aquarium employee waves a mackerel near a penguin — but there’s no reaction. When she moves the fish closer to its beak, the penguin turns away haughtily. An otter sniffs the fish, then runs away.

For the penguins and otters at Japan’s Hakone-en Aquarium, an hour’s drive southwest of Tokyo, inflation and rising prices have meant a change in diet — and the animals are not happy about it.

Before, the aquarium offered penguins and otters “aji,” or Japanese horse mackerel, which the animals readily ate.

But the aquarium, home to 32,000 animals including sharks and seals, was not immune to the economic woes plaguing many global economies. The price of aji has increased by 20% to 30% since last year, the aquarium said.

An employee at Japan’s Hakone-en Aquarium tries to tempt penguins with mackerel, with little success.

So to cut costs, in May the aquarium switched to a cheaper alternative — “saba,” or mackerel.

It has not been well received, with aquarium workers having to get creative to encourage the animals to eat — for instance, the otters and penguins appear more willing to eat the mackerel when mixed with their favorite aji.

“Ideally, they would like to have a full aji, but they are patiently eating mackerel,” aquarium keeper Hiroki Shimamoto told CNN affiliate TV Asahi.

The aquarium is also cutting costs by reducing the number of circulation pumps from two to one, which has reduced its electricity bill by 40% to 50%.

“We could raise the admission fee to the aquarium and fix this issue, but we would like to do our best to keep our facility a comfortable place for our guests to visit. We do not plan on raising admission prices,” Shimamoto said.

The aquarium says penguins and otters have their preferred type of fish and the aquarium tries its best to accommodate their needs.

“All of the animals at the aquarium are family and we do our best to keep them healthy,” it said. “We would never force any animal to eat what they don’t want. We would like to have as many people (as possible) come and visit Hakone and enjoy our animals.”

Top image: An employee at Japan’s Hakone-en Aquarium waves a mackerel near a penguin, who turns away. Credit: TV Asahi