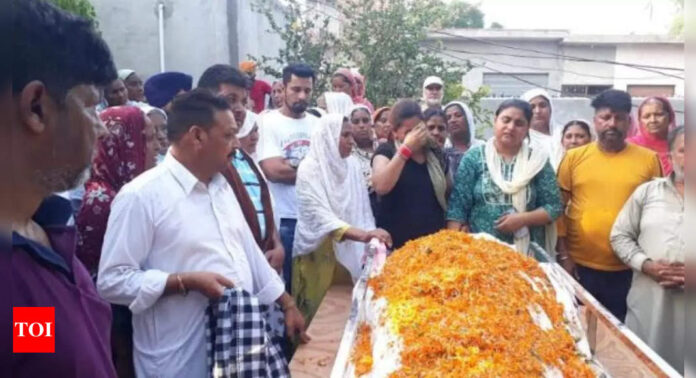 During the ‘Save Sarabjit’ campaign, Dalbir Kaur had developed an emotional bond with Randeep Hooda, Aishwarya Rai and several other Bollywood actors and directors. During those day in an emotional fit, Dalbir had reportedly asked Hooda to attend her funeral.
Rumours are abound that Bollywood actress Aishwarya Rai Bachchan who had played the role of Dalbir Kaur may visit Bhikhiwind to condole the family of Sarabjit Singh in near future.
According to family sources, there was a possibility of Aishwarya Rai clandestinely visiting Bikhiwind to avoid any attraction and to sympathise with Sukhpreet Kaur, wife of Sarabjit Singh and his daughters Poonam and Swapandeep Kaur on the demise of Dalbir Kaur.
However, Poonam denied having any information about Aishwarya arriving at Bhikhiwind. “I have bhua ji’s phone with me I didn’t receive any call from Aishwarya Rai about her visit to Bhikhiwind”, she said.
She said that the “bhog” of Dalbir Kaur would be performed on Monday.
During one of the visit of Aishwarya Rai along with the crew of Sarabjit to Golden Temple in 2016, Dalbir Kaur had stated that her ‘Save Sarabjit’ campaign had reached its logical end with Aishwarya and director Omang Kumar making a movie on her brother Sarabjit’s life which , she stated, had the power to move governments of both India and Pakistan to take notice of the plights of prisoners who were languishing jails of both countries.