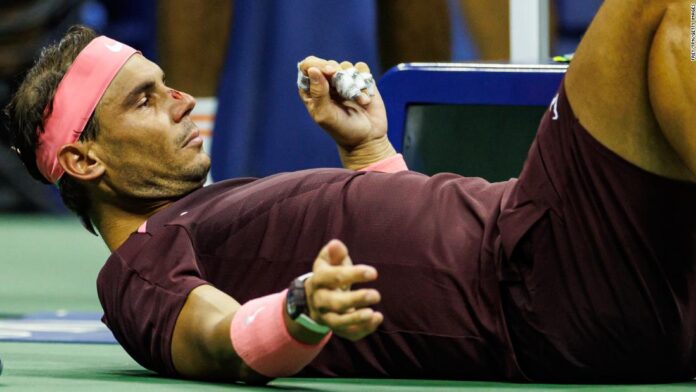 But the victory came with a scary moment in what was to be the final set, one which left the 22-time grand slam champion bloodied.

As the Spaniard stretched to return a backhand to Fognini, Nadal’s racket bounced off the court and inadvertently hit him in the face.

Nadal immediately clutched his nose, dropping his racket and forfeiting the point. He lay down on the court by the umpire’s chair and moved his hand away from his nose, showing the blood which had begun to flow.

He needed a medical timeout to receive attention for the injury, later returning to close out the set. After the victory, Nadal played down the injury, saying he felt a “little bit pain, honestly, but good.”

“(It) was just a strong hit. At the beginning, I thought I (broke) the nose because it was a shock at the beginning. Was very painful,” Nadal explained.

“I don’t know, seems like it’s not (broke). I am not sure yet. I don’t know. I think it’s getting bigger and bigger.”

He joked with a smile: “No, that’s just a shock some way I deserved to play that bad for a while!”

As well as coming back from a bloodied nose, Nadal also had to battle back from a rare poor start.

The Spaniard hit 27 unforced errors in the first two sets, dropping his serve five times including four in a row. He called it “one of the worst starts, probably ever.”

“But that’s part of the game. You need to stay humble, you need to accept the situation. It hasn’t been an easy month for me, so I know this kind of stuff can happen. It’s another opportunity for me. I’m still alive after a match like this. That means a lot.”

The victory means he will play Richard Gasquet in the third round of the US Open. Nadal has a famously good record against the Frenchman, winning all 17 of their clashes.