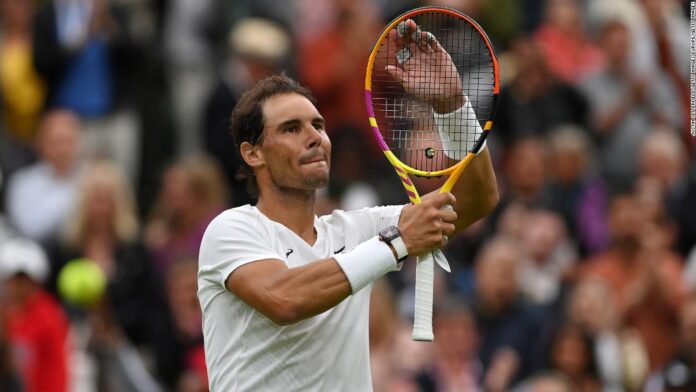 It was the second time in the tournament that Nadal had dropped a set after his victory against Francisco Cerundolo earlier in the week as he begins his pursuit of a 23rd grand slam title.

The Spaniard will likely have to improve on the grass in order to claim his third Wimbledon title, particularly with top seed and rival Novak Djokovic playing in such a dominant manner the previous day.

“Every day is a challenge, that’s the truth. All the opponents are difficult,” Nadal said in his on-court interview.

“We are playing against the best players of the world … Every day is an opportunity to improve, and today, I’m through, so that gives me the chance to keep going — very happy for that.”

After Nadal took the first two sets, Berankis, ranked No. 106 in the world, hit back in the third thanks to an early break of serve.

A 50-minute delay for rain ensued in the fourth to allow time for the roof to close, but Nadal was already 3-0 up in the set and soon wrapped the match in just over three hours once play resumed.

The 36-year-old faces Italian 27th seed Lorenzo Sonego in the third round on Saturday.

Meta Gets Nod to Buy VR Content Maker Within Unlimited as...