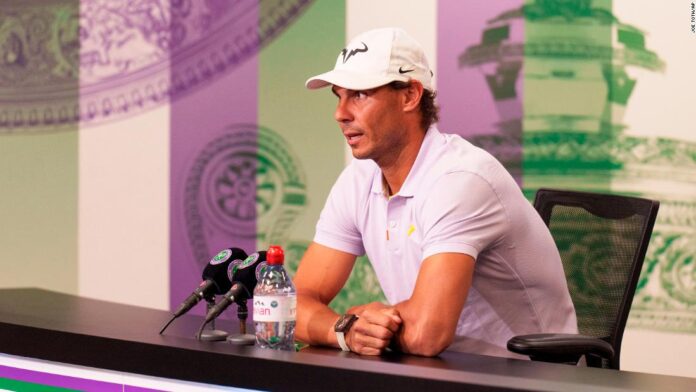 The 22-time grand slam champion was scheduled to face Nick Kyrgios in their semifinal match on Friday. Kyrgios will now head straight to the final to face the winner of the match between Novak Djokovic and Cameron Norrie.

“I have to pull out from the tournament,” Nadal said during a Thursday news conference. “I have a tear in the (abdominal) muscle.”

The Spaniard came through a grueling five-set match against Taylor Fritz on Wednesday, winning 3-6, 7-5, 3-6, 7-5, 7-6, but at times looked to be struggling with an injury to his abdomen.

On more than one occasion, Nadal remained hunched over after a shot and was holding his midriff. The two-time Wimbledon champion called the trainer out for an assessment in the second set, before eventually using a medical timeout and leaving the court for treatment.
“We’re sad to see it end this way,” Wimbledon tweeted, tagging Nadal. “Thank you for another year of unforgettable moments at The Championships.”
Earlier this year, Nadal played through the pain barrier to win his 14th French Open title, receiving injections in his foot before each match. In a post-match news conference at Roland Garros, Nadal said his 21-year career had left him enduring pain “every single day.”