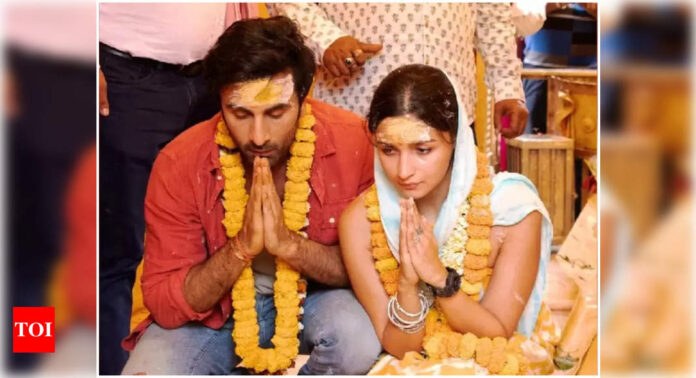 Alia Bhatt and Ranbir Kapoor who are currently awaiting the release of Brahmastra were planning to visit the famous Mahakaleshwar Temple of Ujjain for Sandhya Aarti. However, the duo avoided attending the same due to security reasons.

Buzz is that, several protestors reached the temple and caused a ruckus due to Ranbir’s 2012 ‘beef’ remark. A video of the actor got circulated on social media where Ranbir expressed his love for beef.

Despite the situation being brought under control with the intervention of the local police, it was only the director Ayan Mukerji who made it inside the temple and was seen seeking blessings. Ayan shared a picture of himself seeking blessings and wrote, “3 DAYS AWAY…🤞🕉💥 Feel very happy and energised to have visited Mahakaleshwar Temple today… Got the most beautiful darshan…Wanted to make this visit to close the film-making journey on Brahmāstra, and to get all the positive energy and blessings for our Release 🕉💥#brahmastra”.

‘Brahmastra’ is one the highest anticipated film of the year. The film has been in making for almost ten years. Apart from Ranbir Kapoor and Alia Bhatt, Amitabh Bachchan, Mouni Roy and Nagarjuna Akkineni play pivotal roles in the modern mythological drama.