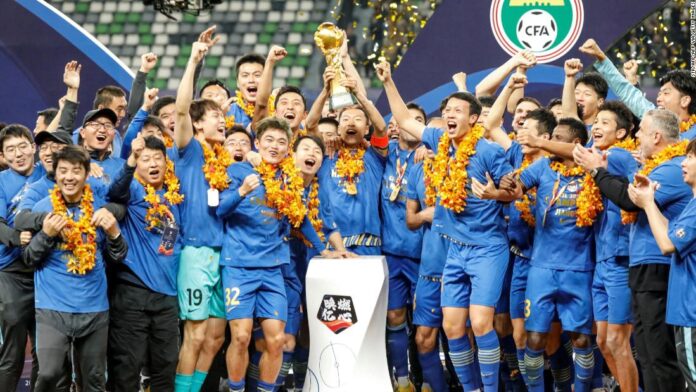 Jiangsu FC — formerly known as Jiangsu Suning — hit the headlines in 2019 after it was reported to have offered Gareth Bale a highly lucrative contract to leave Real Madrid.

“Due to various uncontrollable elements, Jiangsu Football Club cannot effectively guarantee to continue to play in the Super League and the AFC [Asian Football Confederation],” the club’s owners, Nanjing-based retailer Suning, said in a statement.

“In the past six months, the club has gone all the way to seek to transfer the club’s equity with great sincerity, and did not give up the opportunity of Jiangsu Football Club’s inheritance.

“On the occasion of the deadline for admission to the 2021 season … we have no choice but to announce: with immediate effect, Jiangsu Football Club ceases operations of its teams, and at the same time, on a larger scale, we expect people of insight and enterprises from the society to discuss follow-up development matters with us.”

If Jiangsu FC is unable to find a new buyer, that could have implications for the Asian Champions League — the continent’s most prestigious club tournament — which starts in April.

The Asia Football Confederation did not immediately respond to CNN Sport’s request for comment.

For several years, CSL clubs have been luring some of the world’s top talent with eye-watering contracts, leading many to question the long-term viability of the league.

Just last month, fellow CSL club Shandong Luneng was barred from competing in the Asian Champions League due to its breaching of financial regulations.

Local reports also say that Tianjin Tigers — formerly known as Tianjin Teda — is also on the verge of collapse, after its state-owned owner TEDA Holding reportedly pulled its funding ahead of the season.

Part of the issue stems from a recent Chinese Football Association (CFA) ruling that no longer permits clubs to have corporate sponsors in their titles.

The Tigers’ city rival Tianjin Tianhai, once the home of Brazilian striker Alexandre Pato and Italian coach Fabio Cannavaro, collapsed and ceased to exist in May of last year.

Suning is also a majority owner in current Italian league leader Inter Milan after purchasing 68.55% of the club for $307 million in 2016.

Inter did not immediately respond to CNN’s request for comment as to whether Suning’s new football strategy had any implications for the Serie A club.

READ: The foreign footballers giving up their passports to become Chinese

The CFA said it “regrets” Jiangsu FC’s suspension of operations, but “respects the decision.”

“Jiangsu football has had a glorious history and, since its takeover in 2015, the Suning Group has contributed tremendously to football development in general,” the CFA said in a statement on its website, reported Reuters. “The Chinese Football Association appreciates this effort.

“The Chinese Football Association will work towards implementing the China Football Reform and Development Plan to continue its reforms, with an emphasis on strengthening youth development, improving the professional league and uniting all the forces around Chinese football to keep fighting for Chinese football.”

As vice president in 2011, Chinese President Xi Jinping made getting better at the beautiful game a national goal. As a child, Xi had played football at school and had ambitions for the entire nation to fall in love with the sport.

In 2016, China unveiled its blueprint to transform the country into a “soccer powerhouse” able to challenge the world’s top teams by 2050.

Businessmen including Alibaba’s Jack Ma were encouraged to invest billions in the CSL, while Wang Jianlin’s Dalian Wanda Group (DWG) also poured hundreds of millions of dollars into the sport.

However, not a single Super League match sold out in the 2019 season, with stadium capacity averaging at 51% full. During that season Jiangsu’s average attendance was 27,508 in the 62,000-capacity Nanjing Olympic Sports Center Stadium.

Due to the coronavirus pandemic the 2020 CSL season began behind closed doors, before a limited number of fans were allowed into stadiums.