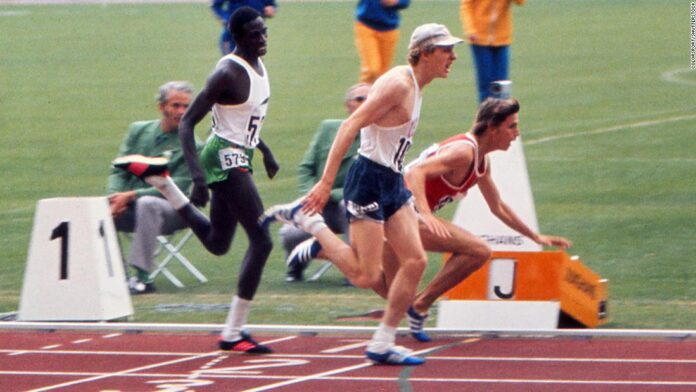 The first wave of emotion arrived almost as soon as the crack of the starting gun had sounded and Wottle watched the other competitors pull away. Within moments, he found himself trailing — and by some distance.

“That brought doubts into me, like: ‘Wow, I can’t believe I’m so far behind. Am I that far out of shape that I can’t stay up with these guys?'”

But what unfolded over the course of race is now Olympic folklore.

Stride by stride, Wottle began to gain ground on the other runners, and by the end of the first lap was within touching distance of the pack.

Relieved, his competitive drive returned as he trained his eye on those in front of him. He started overtaking other runners on the final lap and prepared to launch his kick — what he calls “attack mode” — with 200 meters to go.

Now, Wottle’s hopes of a medal — improbable just moments before — started to crystallize. He overtook Kenyans Mike Boit and Robert Ouko on the final straight, then Yevgeniy Arzhanov, the pre-race favorite from the Soviet Union, suddenly started to fade with meters to go.

Neck-and-neck at the finish line, an exhausted Arzhanov collapsed to the floor while Wottle raised his arms in anticipation of the victory.

“It was almost like a 100-yard dash at the finish line — it was so close,” says Wottle.

“As a runner, you have that peripheral vision. Arzhanov fell right over the finish line … he went straight down. I didn’t sense him next to me, so when I crossed the line, I kind of felt that I had won.”

The 800m final at the Munich Olympics is still considered one of the greatest, most thrilling track races of all time, begging the simple question of how someone so far behind at the start of the race ended up winning gold.

Wottle’s comeback continues to inspire to this day. Grainy footage of the race is regularly circulated on social media, garnering millions of views and thousands of comments praising his never-say-die performance.

Just 0.03 seconds separated Wottle and Arzhanov, who had been unbeaten over 800m for four years prior to the race, at the finish line, while Boit was 0.15 seconds back in third.

Friday marks the 50-year anniversary of the race, and although time has skewed Wottle’s visual memories of how it unfolded, the roller coaster of sensations he felt at the time have endured.

“I’ve forgotten a little bit of what I was seeing in the race, with the runners ahead of me and coming up. I kind of miss that … but I know the feelings that I was having at each leg of the race.

“It was just a constant change of emotions all the way through the two laps.”

To understand why Wottle was so far behind at the start of the 800m final, you need to go back to the US Olympic trials and the weeks building up to the race.

Primarily a mile runner, his coach persuaded him to race the 800m at the trials “kind of as a speed workout for the 1,500 meters.” He ended up tying the world record — “a shock to me as much as anybody else,” says Wottle — and qualifying for both events at the Munich Olympics having improved on his best 800m time by three seconds.

Shortly after the trials, he married his wife, Jan, and the pair embarked on a short honeymoon in Ohio — a decision that would enrage US team coach Bill Bowerman.

“He was really very public about his disgust and my getting married,” says Wottle. “He had a great quote: ‘Wottle gave up a gold medal to take a wife,’ something like that.”

Eager to show Bowerman that his marriage and honeymoon hadn’t impacted his Olympic preparation, Wottle launched himself into training as soon as he returned to the US team.

“I went out and did a very difficult workout, and I didn’t warm up properly,” he says. “All of a sudden, my left knee, my meniscus on my left knee, just flared up.

“My mileage was cut from about 70 to 80 miles a week — that I should have been running at that time — to nothing … I was only able to get my mileage up before the Olympics to about 15 to 20 miles a week.”

The reduced training load meant Wottle arrived in Munich uncertain of how he would perform.

“I had all kinds of doubts that crept into my mind because I knew I was losing conditioning and I knew I didn’t have the get up and go — the kind of the spark that I had in the Olympic trials,” he explains.

“It would reach into the back of my mind and go: ‘Do you really have what it’s going to take to get a gold medal?'”

The knee trouble, the doubts playing on his mind, and his preference for racing 1,500m all contributed to Wottle’s slow start in the 800m final, as well as in the semifinal the day before.

“I never felt that I could keep up with half milers,” he says. “I liked the 1,500 meters better because it was more conducive to my style.

“All that stuff of hanging back, a lot of it is a little bit (because) I didn’t have the speed these guys had to go up. What I did have was the ability to maintain what speed I had for a longer period of time. I could take a certain pace and just be consistent with that pace.”

While the rest of the field scorched off to a fast start in the final, Wottle’s pace remained consistent.

“It was just that maintenance type thing. My two 400 meters were almost exactly the same level — my second 200 meters was the same as my third 200 meters.”

From ‘biggest thrill’ to ‘biggest disappointment’

He was congratulated by Roger Bannister — one of his running heroes and the first man to run a four-minute mile — but struggled to gain approval from Bowerman, who said nothing to Wottle afterwards.

And that wasn’t the only awkward reception he received. During the medal ceremony, he forgot to take off his white golf cap — an item he had grown accustomed to wearing over the past year — and was asked after stepping off the podium what he had been protesting.

He had to apologize and explain he wasn’t protesting anything.

“I wore it on the victory stand during our national anthem, which is a big no-no in the United States,” says Wottle, “and I just forgot I had it on. It’s like a man’s wallet — you put your wallet in your back pocket, and you don’t even know it’s there.”

A week later — and just days after the terror attack that rocked the Games and left 11 Israeli athletes dead — Wottle raced again in Munich, returning to the track for the 1,500m heats.

But there was no repeat of his heroics in the 800m final. After misjudging his kick in the semifinal, he finished a fraction outside the qualifying time and was eliminated from the competition.

“I went from one of my biggest thrills in my running career to one of my biggest disappointments because I really wanted to be in the finals of that 1,500 meters. I felt that I could do something there,” says Wottle.

“I got overconfident. It was a tactical error, and I paid the price … I don’t say it haunts me, but it is one of those ‘what ifs.'”

In the wider picture of his running career, Wottle ranks the Olympic gold on a par with his first sub-four-minute mile — a standout achievement for any male middle distance runner at the time — and equaling the 800m world record in 1972.

He retired from running in 1974 before going on to become a coach and academic administrator — most recently serving as Dean of Admissions at Rhodes College in Memphis, Tennessee, until 2012.

His iconic golf cap is safely housed in the Track & Field Hall of Fame, and he keeps his gold medal securely locked away at home.

“I’m too old to win another one, so I better safeguard it now,” Wottle jokes. But when the opportunity arises, he’s always happy to show it to guests and relive memories of his famous, improbable victory.

“I tell people: ‘Why would you ever get tired about talking to someone about such a great experience?'” says Wottle.

“It really was a wonderful experience.”