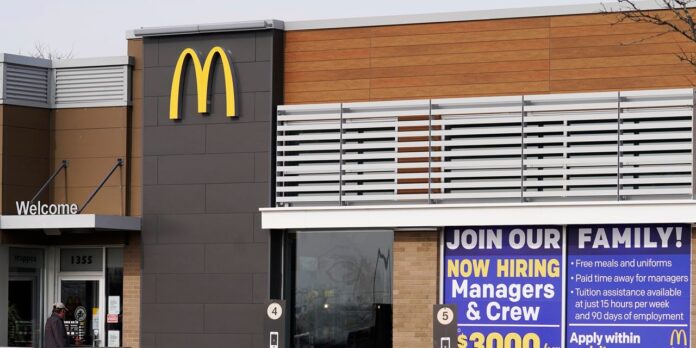 is offering free college tuition to employees who work at least 15 hours a week after four months on the job.

owners are assessing what pay and benefits its U.S. employees most want, to better pitch the Golden Arches as an employer.

who runs 50 TGI Fridays and other restaurants, recently increased hourly wages and is offering employees immediate pay. He said he is still short about 900 workers.

“You have a long wait and empty tables. We just don’t have enough servers,” Mr. Halpern said.

U.S. restaurants increasingly are seating and serving customers again, after a year when quarantining and seating restrictions forced many to launch online-only food brands or rely on takeout business. Sales at bars and restaurants rose 13.4% in March compared with February, the biggest month-over-month increase since June, Commerce Department figures show.

But servers, hosts and line cooks aren’t similarly rushing back, restaurant owners say—whether because they are fearful of Covid-19, have moved on to other industries or remain on unemployment benefits. Other sectors of the U.S. economy also are scrambling to staff up, with manufacturers, live-events coordinators and other companies wrestling with labor shortages.

Diners can see the effects. Some restaurant owners have said they are having to pass along some of the wage increases to customers in the form of higher prices, as other costs rise at the same time. Consumer prices for fast food in March grew 6.5% compared with last year, the biggest year-over-year increase since at least 1998, Labor Department data show.

The labor crunch is affecting service. Some McDonald’s and Pizza Hut restaurant owners said they are closing some locations earlier in the evening than they would have if they were fully staffed, cutting off potential sales. Subway franchise owners are working behind the counter to help. Some

owners said they can’t bring back late-night service because of a lack of servers.

Food-service job postings on Indeed.com in mid-April stood 16.2% higher than in February 2020, the job-listing site said. That reflected the highest number of openings for servers, cooks, managers, hosts and other restaurant jobs posted since the pandemic began spreading in the U.S.

Restaurants were struggling with employment before the pandemic, when unemployment stood at 3.5%. Covid-19 created new problems, restaurateurs said. Millions of restaurant and bar workers were laid off when the pandemic hit last year, and economists expect it will take time for workers who dropped out of the job market to return.

Supplemental federal unemployment benefits of $300 a week for laid-off workers this year are a barrier to bringing back employees, some restaurant owners and economists said. Federal and average state unemployment payments can surpass the weekly pay of an employee working 40 hours at $15 an hour. The median hourly wage for a fast-food worker in mid-2020 stood at $11.47, Labor Department data show.

Proponents of the supplemental unemployment benefits have said the measures remain necessary to support out-of-work people still struggling with Covid-19’s economic fallout, and give unemployed workers time to search for better-paying jobs. Some economists have said the payments are boosting lower-income families that suffered the worst pandemic-driven job losses, and helping workers who need to care for family members at home during the pandemic.

Full-service and high-end restaurants like Wolfgang Puck’s Spago Beverly Hills, where servers can earn $100,000 a year with tips, also are struggling to recruit workers. Mr. Puck said in an interview that expanded unemployment benefits and new options like personal chef gigs are contributing to staffing shortages at Spago and his other restaurants.

“I don’t think we should pay people to stay home and not work if there are jobs available,” he said.

The industry’s competition for workers could intensify. Chains including Chipotle,

are hiring, too, and have boosted hourly starting wages to $15 an hour.

“We are inundated with applications,” said

, which raised its starting wage to $16 an hour last month.

Chain restaurant companies are trying to help their franchisees hire. Taco Bell and IHOP are holding job fairs to try to recruit an additional 15,000 employees across both chains.

At McDonald’s, where locations in Texas alone aim to hire 25,000 new workers starting this month, restaurant owners are surveying managers to assess pay, benefits and other current and potential job offerings to guide a new employee program. The company and franchisees are “more committed than ever” to attracting the workers to meet demand, help performance and improve McDonald’s reputation as an employer, the chain’s U.S. division said in a company email earlier this month.

“We are absolutely struggling to get people to even show up for interviews,” Ms. Roeske said.

She said she fears the pandemic has tarnished restaurants’ image as reliable employers.

Earlier this month, Zella Roberts, a 21-year-old college student from Asheville, N.C., quit her job at a local Sonic. She said she didn’t feel the restaurant did enough to enforce mask policies, and that an average pay of $10 an hour with tips wasn’t worth the risk.

What other incentives could restaurants provide to encourage workers to return to work? Join the conversation below.

A spokesman for parent company Inspire Brands Inc. said Sonic’s starting wages are often above state and federal minimums, and the company and its franchisees have worked to ensure the health of its employees.

Ms. Roberts, who hopes to go into social work after graduating in May, said fast food wasn’t the right environment for her and other former co-workers who have left. “There’s huge turnover,” she said.

Write to Heather Haddon at heather.haddon@wsj.com