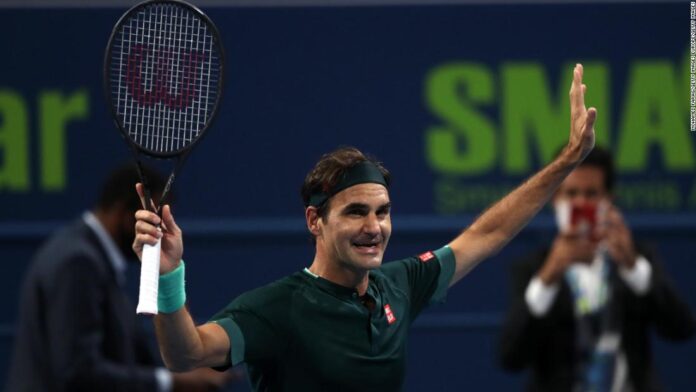 Playing in his first game for more than 13 months having undergone two knee surgeries last year, 39-year-old Federer won a tense first-set tiebreak 10-8 before being broken by world No. 28 Evans near the start of the second set.

Evans closed out the second set — the first time he has taken a set off Federer in four meetings — but the Swiss star was able to edge out the decider with his first break of the match at 6-5.

“Dan had more energy left at the end but I was serving well and I thought I played actually a really, really good match so I’m incredibly happy about my performance,” Federer said in his on-court interview after the game.

The 20-time grand slam champion next faces Nikoloz Basilashvili in the quaraterfinals at the Qatar Open, a tournament he has won on three previous occasions.

Initially saying that he had hoped to return for this year’s Australian Open, Federer was forced to withdraw from the tournament late last year.

He has dropped to No. 6 in the world rankings during his injury absence, but said he feels pleased to have come through the lengthy period of rehab that followed last year’s surgery.

“It’s been a long and tough road for me,” he said. “I’ve enjoyed it, though, it’s been a huge challenge of mine in my tennis career. To come back at my age is not something that’s very simple.

“I’ve had a wonderful team around myself that always supported me throughout and that made it much easier. It was worth it, because I played a great match today.”

Federer is no stranger to injury comebacks having recovered from a previous knee surgery in 2016 to win two grand slam titles.

The game against Evans, who has been a hitting partner of Federer’s over the past few weeks, was a tight affair that could have swung either way.

The British No. 1 had break points at 3-3 in the third set that were saved by Federer, who in turn found himself with a match point at 5-4 that was saved by Evans.

But Federer eventually closed out the contest two games later with a thumping, down-the-line backhand that set up a place in the quarterfinals.