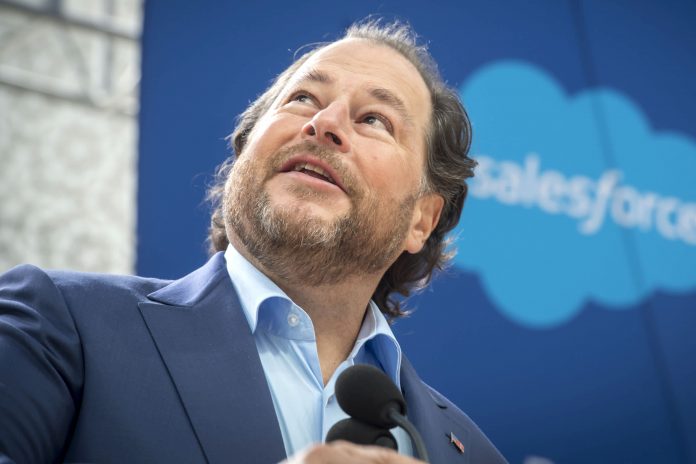 Marc Benioff, chairman and chief executive officer of Salesforce.com speaks during the grand opening ceremonies for the Salesforce Tower in San Francisco on May 22, 2018.

The deal is expected to be about half cash and half stock, the sources said, and will price Slack at a premium to its current price. Salesforce is set to report quarterly earnings on Tuesday.

Shares of Slack rose about 8% Monday on the news. Salesforce shares fell about 1.5%.

Salesforce has made several large acquisitions in recent years, including its $6.5 billion deal for MuleSoft in 2018 and $15.3 billion deal with data visualization company Tableau.

The deal with Slack could become one of the largest software deals. IBM bought Red Hat for $34 billion in 2019 and Microsoft bought LinkedIn for $27 billion in 2016.

It could also make Slack a more formidable competitor to Microsoft’s Teams communication product. Slack filed a complaint against Microsoft with the European Commission this summer, alleging it abused its dominant market position to eliminate competition for Teams. Microsoft has said Teams has benefited during the pandemic from video-conferencing capabilities that Slack lacks.

This story is developing. Check back for updates.

UDF, LDF Competing for Scams: In Kerala, Amit Shah Hits Out at CM Over Smuggling Cases