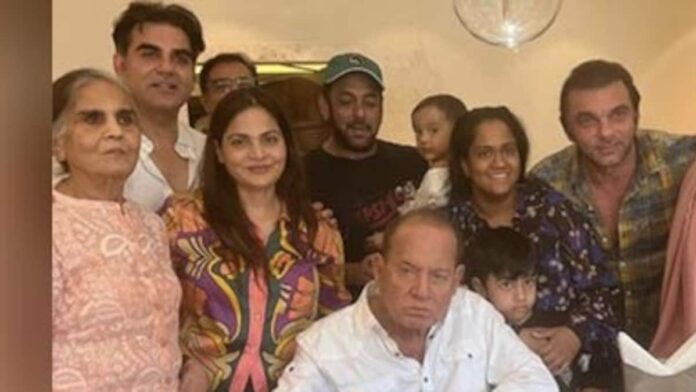 Bollywood veteran Salim Khan celebrated his 87th birthday today on November 24, 2022. He celebrated the day with a family get-together with Salma Khan and Helen, sons Salman, Arbaaz and Sohail, and daughters Arpita Khan Sharma and Alvira Khan Agnihotri in attendance. The birthday bash seemed to be quite a celebration with a lavish Indian food spread. Arbaaz Khan posted a family picture on his Instagram handle in which the entire family was posing with Salim Khan in the centre and a large table holding the meal in front.

On the table, we can see large bowls of non-veg biryani, nalli nihari, another non-veg curry and a rice dish that looks like soya pulao. We can also see a sizeable bowl of green chutney, yellow dal, onions and a snack spread across the table with other accompaniments.

It looks like quite a treat with rich and lavish Indian meals. The Khans seem to be quite the foodies. In fact, we are quite sure about it. Arpita Khan cut a massive two-tiered cake decorated with white icing on her birthday with the family, including Salman Khan. Watch the video here.

Having Indian food at a family gathering is quite a good idea. Do you have such a celebration coming up? Here are some popular Indian recipes you can try.

It was nice to see Salman Khan indulging in some guilt-ridden food. On the professional front, Salman Khan will be soon seen in ‘Kick 2’, with Jacqueline Fernandez. He is also set to star in ‘Tiger 3’ with Katrina Kaif. He will also star opposite former Bigg Boss star Shehnaaz Gill in ‘Kisi Ka Bhai Kisi Ki Jaan’.

Watch: Sachin Tendulkar Shares His Meal Plan – It Has Dishes From All Over India