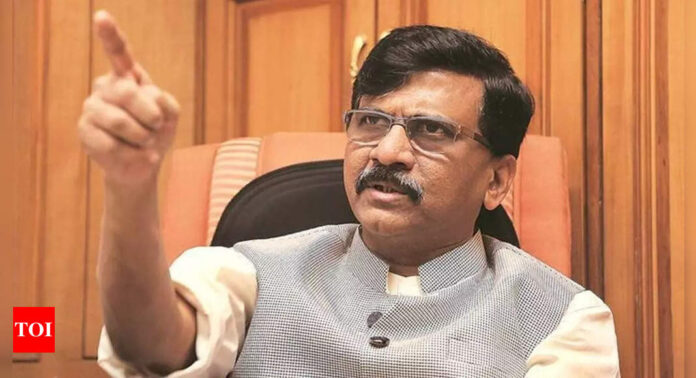 NEW DELHI: The appearance of Shiv Sena member Sanjay Raut before the ED is crucial to the progress of investigation of the Rs 1,000 crore slum redevelopment scam in Mumbai, agency officials who have gathered fresh details of some benami properties allegedly linked to the Sena leader and his close aides have said.
The agency has issued fresh summons to Raut asking him to appear before the ED’s investigation team on Friday. On Tuesday, Raut had sought postponement of his appearance citing the political developments in his home state Maharashtra as the reason. Sources said Raut may be questioned on fresh evidence revealing investments in benami properties and related to other details of the money trail associating his wife and aides to the ‘proceeds of crime’.
“Jumping summonses will be treated as not cooperating with the probe,” a senior official pointed out. Raut, however, told reporters on Thursday that he will join the probe on Friday. In April this year, ED had attached the Sena leader’s flat in Mumbai’s Dadar suburb which is in the name of his wife Varsha, and eight plots in Alibaug, together estimated to be worth Rs 11 crore.
His close associate Pravin Raut was arrested earlier this year and is still in judicial custody along with Rakesh Wadhawan, promoter of Housing Development and Infrastructure Ltd (HDIL). Wadhawan had allegedly paid Pravin Raut Rs 100 crore from the ‘proceeds of crime’ of the alleged money laundered in the Rs 1,000 crore-worth Mumbai slum redevelopment project known as the Patra chawl Project at Goregaon, Mumbai.
Pravin Raut was one of the directors of Guru Ashish Construction Pvt Ltd which was awarded the contract for the redevelopment of the slum. Instead of redeveloping and giving flats to the affected poor people, the company allegedly sold development rights to nine builders and “collected Rs 901.9 crore”, the ED had claimed in its attachment order. The ED’s money laundering probe was initiated on the basis of a 2018 FIR of Mumbai police against Guru Ashish Construction, in which Rakesh and his son Sarang Wadhwan of HDIL were directors along with Pravin Raut.
The ED alleged that Sanjay Raut’s Dadar flat in his wife’s name was purchased from the ‘proceeds of crime’ his close associate Pravin Raut had shared with his wife.