Sara Ali Khan is a foodie at heart

Sara Ali Khan, who was last seen in David Dhawan’s ‘Hero No.1’, may not have ended the year on a high but she has plenty to look forward to this year. ‘Hero No.1’, the remake of the 1995 blockbuster of the same name starred Varun Dhawan and Sara Ali Khan in lead, the film received a lukewarm response. Incidentally, Sara’s other release from 2020, ‘Love Aaj Kal’ also opened to mixed reviews. But Sara is clearly not among the ones to dwell in the past; the 25-year-old actress is working with megastars Akshay Kumar and Dhanush for her next film ‘Atrangi Re’ and is leaving no stone unturned in her preparation for the same. However, in the middle of her intense work-out regime and diet plan, Sara does not mind nibbling into some of her favourite snacks either, and how we love it when she unleashes her ‘foodie side’.

On Wednesday evening, Sara Ali Khan shared a picture of not one, or two, but eight plates of bhelpuri placed neatly on a tray. “Super Yummy”, read the gif on the picture. Take a look: 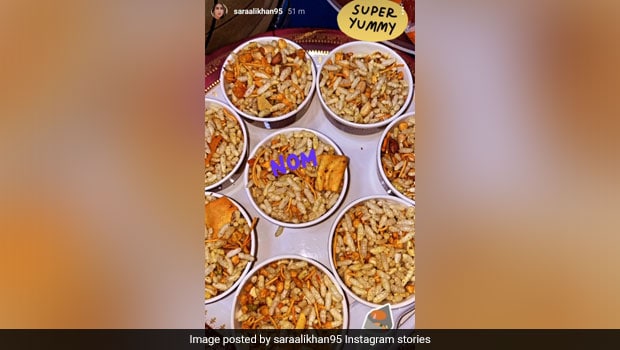 For the uninitiated, Bhelpuri is a puffed rice snack that is spruced with spices, and crunchy sev, chana, papdi and peanuts. Bhelpuri also has a Bengali cousin called ‘Jhalmuri’ which is, even more, hotter because of the addition of green chillies and mustard oil. Bhelpuri is one of the easiest snacks you can make at home, and the best part is that you can customize it as per your liking. Make it healthy, make it greasy, it is all up to you. Here is a yummy recipe of bhel puri you can start with.

Running Out Of Nutella? Now Make It At Home With This 2-Minute Recipe

Summer-Special Doogh Recipe: Have Your Tried This Afghani Buttermilk (Chaas) Yet