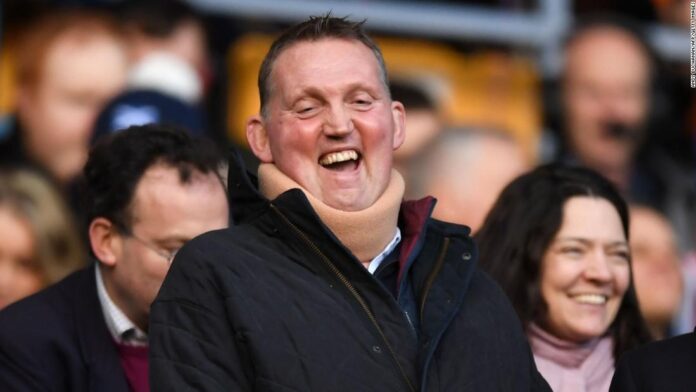 At six feet and six inches tall, he towers over almost everybody and just in case you don’t quite spot him the first time, he’s usually decked from head to toe in a bright, loud tartan suit. With a broad, beaming smile to complete the ensemble, Weir is just impossible to ignore.

The Scottish broadcaster Jill Douglas has known him for most of her life, “He is one of the most positive individuals I’ve ever encountered and always has been,” she told CNN. “He has an absolute joy of life. He loves a party. He loves people. He’s a very sociable character. He’s funny, but very driven.”

As a rugby player for Scotland, Weir wore the number five jersey of the lock position and was easily identifiable by his shock of blonde hair framed by a headband to protect his ears. He was once described by the legendary commentator Bill McLaren as ‘a mad giraffe.’ Weir played 61 times for his country, featuring also in the successful British and Irish Lions’ tour of South Africa in 1997.

He was a farmer from Borders country, whose athletic prowess took him all over the world.

Life is for living, Weir told CNN: “Life has to be a bit of laughter and a bit of a smile, because you’re only here once and you’ve got to enjoy yourself.”

Everything changed for him though, in 2016, when Weir was diagnosed with the neurodegenerative disorder motor neurone disease (MND). He first noticed a problem when he caught his hand in a door, and when it still hadn’t healed several months later, he sought out a medical evaluation. The diagnosis was devastating.

His doctors told him bluntly that his life expectancy might not extend much past 18 months and that he’d be in a wheelchair within a year.

Speaking from his home near Edinburgh on a remote video link, Weir summarized the brutal facts of life with MND. “It’s pretty horrific when you get the diagnosis. It’s basically a muscle-wasting disease. You can’t eat, you can’t bathe, you can’t go to the shower, the toilet, dress. You eventually can’t speak, you can’t swallow, you can’t breathe.”

As he recounts all the horrors of a disease that he’s endured, he at least can reflect on something positive: he’s still here. And his jovial nature prevents him from lingering in the darkness for long; somehow he’s able to raise a laugh when concluding, “[So] it’s not the best news that you can get!”

Jill Douglas has known Weir since they were teenagers; they met through their love of horses.

“He is a very fine equestrian, would you believe,” notes Douglas. “On a very large horse, obviously!”

She said she was “in pieces” when her long-time friend shared the news.

“It’s the worst diagnosis. If you talk to people in the medical profession, it’s a diagnosis they never want to share with the patient because there is no treatment, there is no cure. And it’s a horrible way to live the end of your life,” she adds.

As he began the painful process of telling the world and figuring out how it would impact his family life with three teenage sons, his friends asked how they could help. The result was the ‘My name’5 Doddie’ foundation which in just three years has raised over eight million dollars to fund the search for a cure and another million to directly help patients with MND.

READ: All Blacks great Dan Carter on his playing career and the importance of mental health

Douglas now serves as the CEO of the foundation and admits that they faced a steep learning curve initially but are seeing progress now.

“We have a one in 300 chance of being diagnosed with motor neurone disease in our lifetimes,” says Douglas. “That’s the harsh reality of it.

“[But] I think there is a sense that we are on the cusp of something really amazing, and we really hope that this momentum will continue.”

Weir says that the foundation has given him a purpose to carry on.

“It’s given me a massive boost and I’ve been very humbled; the generosity has been overwhelming,” he says.

He’s also motivating the experts to work faster, because — from his perspective — there’s really no time to lose.

“I’m asking some of the professors quite interesting questions,” he says.

When told it might take five years to find a cure, his response has been, “Why not one year? What do you need to do one year? Maybe they’re not used to that, but they’re coming up with some great ideas.”

Weir turned 50 last year and he’s no longer trying to ruck and maul or dominate at the lineout, but he approaches his new life as if it’s still a game.

“Every day for the last four years was like a game of rugby. Sport has taught me don’t ever give up,” he says.

“Be mentally positive every day. I have a fight against MND; that little fight might be coming down the stairs, it might be drinking a cup of tea, it might be getting off my chair.

READ: ‘My own death felt preferable to anybody discovering I was gay.’

In the face of such a debilitating condition and seemingly impossible odds, Weir’s attitude has been relentlessly and infectiously positive.

Weir’s tireless work has been recognized with numerous personal accolades, all of which he finds rather awkward.

“I feel very guilty about all the awards,” he admits. “This is a team effort. It’s quite a difficult thing to accept. I find it easier to help people than to be helped. After four years, I’m beginning to accept the amount of love that’s out there, so I’d just like to thank everyone.”

His legacy has also been cemented with a trophy, the Doddie Weir Cup, which is up for grabs every time that Scotland play Wales on the rugby field.

“It’s a magnificent trophy,” says Douglas. “It has the Doddie tartan around the top. It’s got these great big handles which we think represent his enormous ears, and it’s tall and thin – like he is!”

When Scotland won the trophy last October, the team’s coach Gregor Townsend — a former teammate of Weir’s — brought it round to the house, so the family could spend some time with it.

“To get a big cup named after you, while you’re still living, is quite unbelievable, so I’ve been very humbled, very honored,” Weir explains.

CNN spoke to Doddie Weir just a few days after Scotland had beaten the Six Nations champions England at their home stadium of Twickenham, the first time that Scotland had won there in 38 years. Weir was still basking in the glow of victory and he says it inspires him to keep going.

“Scotland has maybe 10 to 15 thousand rugby players and two professional teams,” he said.

“England has 12 professional teams and I think 250,000 people playing rugby. The underdog is always the Scots. At the weekend, David beat Goliath and what a great occasion it was. I plan to do the same with MND.

“No one has survived MND. But somebody has to win one day, and I really hope it’s going to be me and many others who are joining my fight.”

The current pandemic crisis and the role of the industry associations