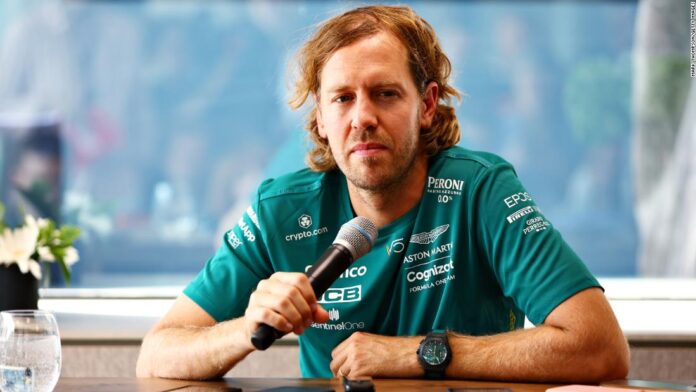 But his mindset and approach to issues away from the track have developed with age and experience.

But the 35-year-old expressed how, as he’s grown older and been more receptive of issues away from the track, he is more willing to take steps to tackle them.

“It sounds a bit stereotype, but you turn 30 and I mean, I have kids, so things change,” he explained. “And as much as I’m the same as I used to be 10 years ago, I’m not the same and a lot of things have changed.

“So also, when it comes to interests or how you see the world and how you understand the world and I think I’ve always been trying to see things, but maybe I didn’t see as many things when I was young compared to today. Some things, I’m thinking: ‘What? How could you miss them?'”

And one of the topics Vettel is very passionate about is climate change and the extent that should be taken to tackle the issue.

Earlier this year, the four-time world champion said that climate change had made him question his job as a driver traveling the world to race cars.

Vettel believes that the racing world is “not doing enough” to reinvest the vast profits it makes because “the problem we are facing is bigger than we maybe understand.”

“Obviously, we have big events, a lot of people attending so you need to have the infrastructure in place to transport these people if you want to stop them coming by car, for example, which here in the Netherlands, works well because it’s so isolated and there’s only two roads and it would be a disaster if everybody could come by car.”

F1 are attempting to tackle the issue of climate change with new engine regulations that will come into play in 2026.

In these new generation of cars, the engines will use significantly less energy, will use fully sustainable fuels and will produce net zero exhaust CO2 emissions, while still preserving the same power and speed fans love.

Vettel believes that if the sport wanted to implement those changes sooner, it could, but would require it to put “internal problems” aside.

“Obviously, to exercise our passion, we burn fuel and that’s what people see. And if people criticize that, it’s fair,” he said.

“It’s fair to be criticized in a time where we are talking about approaching a winter where people might be not as comfortable as they used to be and might be freezing at home and will have to face very, very different problems, not being able to pay their bills, etc. and so on. So I think it’s right that we do see that and we try and challenge it.”

He added: “It needs us, you and me, to rethink our behaviors and be happy with maybe changing some things and giving up some of the comfort. Let’s face it, it boils down to comfort often.

“And on the other hand, it needs systematic change. It needs regulations and rules that don’t allow you to hold the event unless you do certain things and you tick certain boxes.”

Like another great champion in another sport — Serena Williams — 2022 is the year for Vettel to step away from the cockpit, hang up the helmet and retire from racing.

Over his 15-year career, he became one of the sport’s most successful drivers, recording 53 race wins and 122 podiums.

Between 2010 and 2013, he was the dominant driver in F1, winning the driver’s championship title four successive years while driving for Red Bull.

Only Lewis Hamilton and Michael Schumacher have claimed more wins than Vettel, who is currently in his second year racing for Aston Martin after a six-year stint with Ferrari.

After such a distinguished career behind the wheel, Vettel is relishing the opportunity to spend more time with his three kids, without also having to worry about his performance on the track.

“It sounds maybe funny, but just to be also there when I’m there and not in my thoughts and thinking of what I might need to do and prepare and think of to outsmart or outdrive the others,” Vettel said.

He added: “And I know that the way I did this job for so many years and want to do it, and I’m convinced it is right to do it, takes a big effort and a lot of energy. And if you try to do all the things at the same time, it doesn’t work.

“So it’s been tough anyways, but I think I’ve managed very well and to be there and to do this. I think that the time feels right to do other things, like I said, which is obviously a big part focusing on family life, but also discover new sides or new elements about me and the interests that I have and give them more space and more time and more room to explore really.”

But although he retires as one of the most successful drivers in F1 history, Vettel acknowledges that he will be forgotten due to the nature of time.

“For the racing, for what I have achieved on the track. But then that will be forgotten one day because there’s new kids, they’re really doing great and they will continue to do great. And then there will be new kids again.

“So, hopefully, we’ll have some girls and women in the future as well. I don’t think I need to be remembered and I’m not offended if people forget me in this regard. So I think I’m happy with what I have achieved, but it’s normal that time goes on and there’s new heroes to be celebrated.