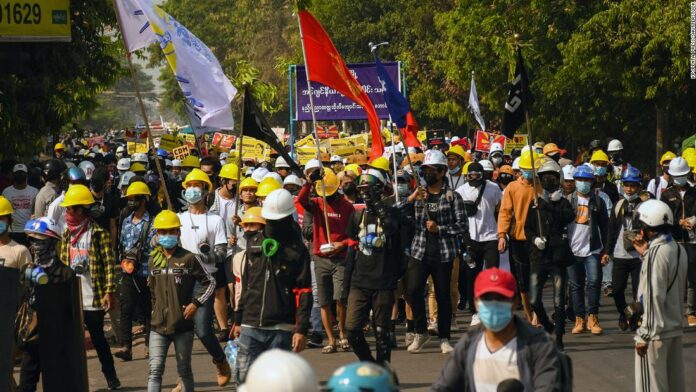 The deaths have raised concerns about the condition and treatment detainees are receiving in detention. Since the military seized power in a coup on February 1, security forces quickly moved to stifle dissent and arrested government officials, protesters, journalists, civil servants and NGO workers, and repressed independent media.

Many people have been taken arbitrarily in nighttime raids and their families do not know where their loved ones are, or what condition they are in, the United Nations said. Human Rights Watch said that people who are forcibly disappeared are more likely to be subjected to torture or ill-treatment than others arrested.

The exact cause of death is still unknown but AAPP added Zaw Myat Lynn was subjected to beatings.

Shortly before his arrest, Zaw Myat Lynn posted a livestream on Facebook in which he said, “I want to encourage all citizens across the country that we will be protesting day and night for 24 hours against the dictatorship.”

He urged people to continue fighting the army, saying “we will risk our lives to defeat them.”

“We are showing to the international communities including UN and other agencies that we, citizens of Myanmar want democracy and we value democracy as the most precious thing in our lives,” he said.

It follows the death of a Yangon NLD party chairman Khin Maung Latt, who died while in custody on Saturday.

“On the night of his arrest, Khin Maung Latt was tortured to death in his cell,” AAPP said in a news release. Reports of bruising to Khin Maung Latt’s head and body raised suspicions he had been abused, NLD lawmaker Ba Myo Thein told Reuters.

CNN cannot independently verify this reporting and the details surrounding the deaths of Zaw Myat Lynn and Khin Maung Latt’s are not immediately clear.

Rights groups have called on the military junta, led by coup leader Gen. Min Aung Hlaing, to promptly and impartially investigate the deaths.

“Myanmar’s junta runs the security forces and can quickly find out who killed Khin Maung Latt if they want to,” Brad Adams, Asia director at Human Rights Watch, said in a statement. “If they want to show they believe in the rule of law, all those responsible should be held to account. Sadly, Myanmar’s security forces seem intent on using nighttime raids and brutal mistreatment to create fear and break popular resistance to military rule.”

Myanmar has been thrown into turmoil since the military seized power, detaining state counselor Suu Kyi and forming a new junta to run the country. For more than a month, protesters across Myanmar have turned out daily in their thousands to resist military rule.

Security forces have responded with increasing violence and brutality. Witnesses have reported extrajudicial killings, while footage and photographs show police and the military shooting dead anti-coup protesters and beating detainees.

At least 54 people have been killed in the protests, according to the UN, though activists say the number is higher. AAPP said 1,939 people have been arrested, charged or sentenced since the coup.

This week, the post-coup crackdown by the military appeared to intensify as security forces revoked the licenses of five independent media companies before a late-night standoff that saw hundreds of young protesters trapped in Yangon.

No staff at Mizzima were detained but a family member said Kamayut’s co-founder and editor-in-chief were arrested by security forces, Myanmar Now reported.

Myanmar Now’s founder said their own offices were raided Monday. Myanmar Now and Mizzima are among the five media outlets that had their publication licenses stripped.

“They seized computers, seized printers, and parts of the newsroom’s data server as well,” Lei Win said, adding that nobody was in the office at the time nor had they been since the coup.

“Obviously it was done in a very public manner, witnesses saw the security forces storming the building where the office was, and there was this show of force that perhaps was trying to send a message,” she said.