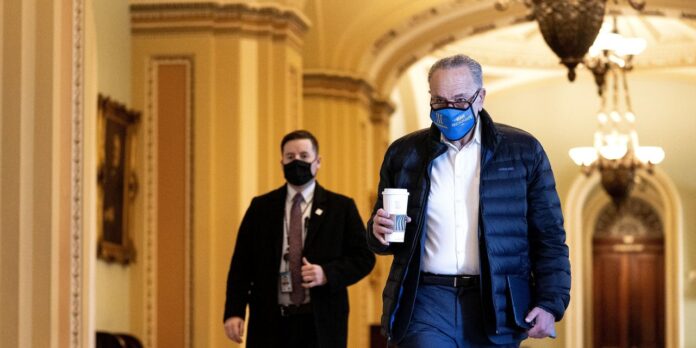 Republicans can’t block Democrats from passing the legislation, but they are planning to drag out the timeline. Sen. Ron Johnson (R., Wis.) forced Senate staff to read the 628-page bill aloud, which is expected to take several hours. After the reading, the Senate will conduct hours of debate and a blitz of amendment votes known as “vote-a-rama.”

Senate Majority Leader Chuck Schumer (D., N.Y.) said the Senate would complete the legislation this week “no matter how long it takes.”

All 50 Democrats stuck together on the procedural vote, confirming that the party has coalesced around the broad relief package, while all 50 Republicans were opposed. Vice President

broke the tie in Democrats’ favor.

The legislation would send a $1,400 direct check to many Americans, provide $350 billion to state and local governments, fund vaccine distribution, and expand the child tax credit, among other measures.

While the House passed the bill last week, Democrats in the Senate are making a number of changes to it. After it passes the Senate, the House will then need to approve the updated version of the bill before it goes to President Biden for his signature.

Senators narrowed the group of Americans who will receive direct payments following a push from a group of centrist Democrats. Individuals who make less than $75,000 and married couples making less than $150,000 will still receive the full $1,400 payment, but the size of the payment will shrink more quickly for people with higher incomes. The payment will hit zero for individuals making $80,000 and couples making $160,000—a drop from the previous caps of $100,000 for individuals and $200,000 for couples.

Senate Democrats added a provision that would make much student-loan forgiveness free from income taxes, creating an exception from 2021 through 2025 to the normal rule that canceled debt is income.

Other measures in the bill that some Democrats had sought to change, including a $400 weekly jobless aid supplement, are expected to stay the same as they were in the House legislation.

Republicans have largely lined up to oppose the legislation, attacking many of its measures, including the aid for state and local governments, as wasteful and unnecessary.

Democrats have said that the legislation is necessary to bring the country through the pandemic, pointing to polls showing its popular support.

“There is enormous support for these provisions on both sides of the aisle in the country,” said

Among the other changes Democrats in the Senate are making is increasing the size of healthcare subsidies for laid-off workers, covering 100% of health-insurance premiums people pay under Cobra, up from the 85% provided in the House.

Democrats also shuffled tax provisions in the bill. They removed a House proposal that would have frozen the growth in annual limits on contributions to retirement accounts after 2030. They replaced it with tighter limits on companies’ deductions for executive compensation—but only starting in 2027.

Senators are also providing $8.5 billion for rural healthcare providers and setting aside $10 billion of the state and local aid for infrastructure projects. For state and local aid, senators are mandating that individual states receive at least as much as they did from a previous aid package and allowing governments to use the funds for economic recovery efforts. They are also placing rules on how the funds can be used, barring states from using the aid for pensions or to finance tax cuts.

Some centrist Democrats had sought to send a slice of the state and local funding toward expanding broadband access, but the effort ran into the limitations of reconciliation, according to people familiar with the matter, preventing them from targeting the funding too closely. Instead, lawmakers targeted the $10 billion towards infrastructure generally.

—Kristina Peterson contributed to this article.