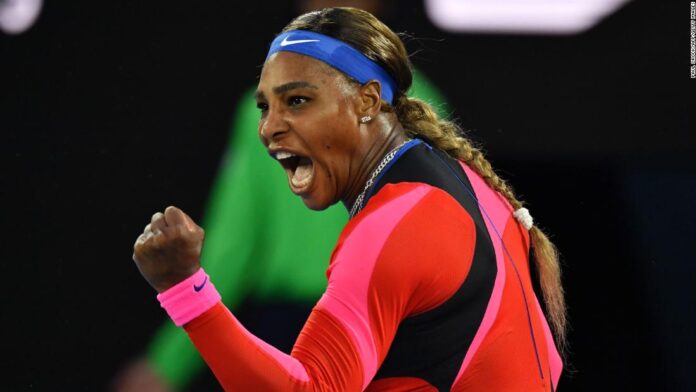 The 23-time grand slam champion put in a dominant performance against the Romanian, winning 6-3 6-3, on Tuesday at Rod Laver Arena.

It will be the 40th grand slam semifinal of Williams career as the 39-year-old looks to equal Margaret Court’s record of 24 career grand slam victories.

“I definitely think this is the best match I’ve played this tournament for sure,” Williams said afterwards.

“Obviously I had to, going up against the No.2 in the world. I knew I had to do better and that’s what I did. I’ve been watching her and I’m sure she’s been watching me.

“I feel like this is such a good opportunity for me just to keep doing my best. It’s the first Grand Slam of the year for me. I had an incredibly long, arduous off-season. And so, I’m honestly happy with every win I get.”

The American will now face three-time grand slam winner Naomi Osaka in the semifinal after the 23-year-old breezed past Hsieh Su-wei in just 66 minutes — 6-2 6-2 — in their quarterfinals.

The semifinal between Williams and Osaka will be the pair’s first meeting in a grand slam since the final of the 2018 US Open when Williams clashed with umpire Carlos Ramos.

After almost four years since her last grand slam victory — which came in 2017 at the Australian Open — there seems to be a new spring in Williams’ step.

READ: READ: Serena vs. Osaka — remembering the 2018 US Open final

Having at times struggled with her quickness across the court, the 39-year-old looks to have regained that speed and as a result, Halep proved no match for her.

Williams powered her way around the Rod Laver Arena court in Melbourne, breaking Halep early in the first set and not loosening her grip during the opening salvo.

And although Halep showed her champion spirit in the second set — the Romanian is a two-time grand slam winner — to race into an early 3-1 lead, Williams never blinked.

Her excellent defense and return game dragged her back into the set, eventually putting together a run of dominant games which wrapped up her victory in an hour and 21 minutes.

It means that since the middle of 2010, Williams has only lost two grand slam quarterfinals.

Now, the seven-time Australian Open winner will face Osaka in a highly-anticipated semifinal match-up, their first meeting in a grand slam since that infamous US Open final clash in New York.

The final saw Osaka win her maiden major title after Williams accused umpire Ramos of being a “thief”. Williams was eventually fined $17,000 for three code violations as a result of her behavior.
Although Ramos declined numerous interview requests from the world’s media to give his side of the story, he told Portuguese paper Tribuna Expresso a week after the final: “I am good, under the circumstances. It’s an unhappy situation but a-la-carte refereeing doesn’t exist. Don’t you worry about me!”