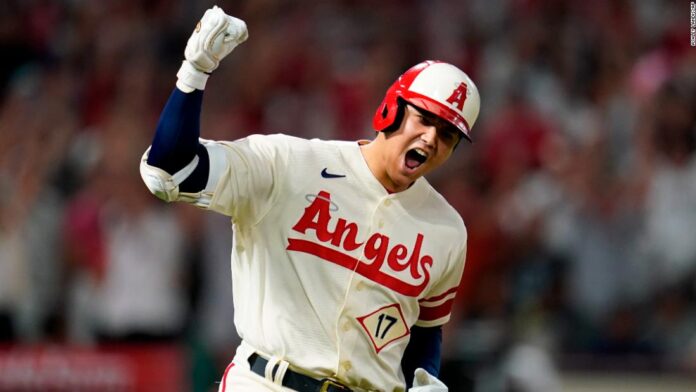 The two-way superstar’s three-run blast off the Yankees’ Gerrit Cole in the sixth inning gave the Los Angeles Angels the lead, and they eventually secured a 3-2 victory over the Yankees.

Ohtani said he was “simply honored, happy and humbled” to hear of his achievement. “But I just want to stay healthy and finish strong.”

The reigning MVP is locked in a race for the American League Most Valuable Player award with the Yankees’ Aaron Judge — something which he admitted propelled his performance on Wednesday.

“It definitely leads to motivation to do better and try to go for that hardware,” Ohtani said. “It’s something I think about. But for the most part, I take it game by game and at-bat by at-bat. At the end of the day, we’ll count it all up.”

Ohtani, who delivered the winning blast for the second time in the three-game series against the Yankees, has recorded three home runs in his past four games.

“It was going to come down to something like that with the fans and the way the stadium was,” Angels interim manager Phil Nevin said.

“One of the stars was just rising up right here. Sho got a good one. He swung the bat well all three days. As a fan, it was an awesome day and I’m sure it was fun the last few days.”