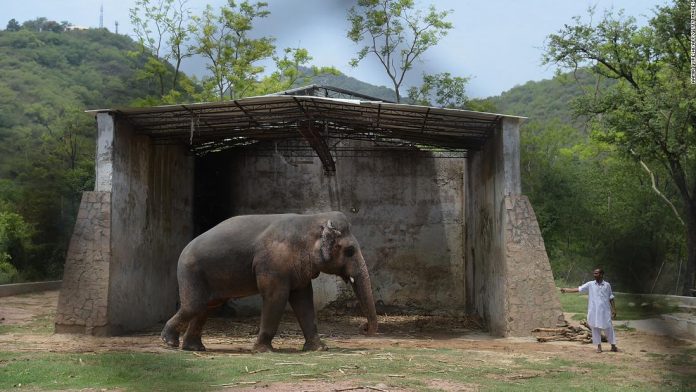 (CNN) — A 36-year-old overweight Asian elephant, who has spent much of his life languishing alone in captivity, is on his way to a sanctuary in Cambodia — thanks in part to the efforts of American pop star Cher.

Pakistan’s only Asian elephant has spent years in grim conditions in a controversial Islamabad zoo, where he suffered from a lack of exercise as well as cracked and malformed nails due to living in an inappropriate structure.

After Kaavan’s partner died in 2012, he was dubbed the “world’s loneliest elephant” — and since 2016, Cher has been part of a huge social media campaign to relocate him.

Earlier this year, Islamabad’s High Court closed the zoo over its poor conditions and gave animal welfare organization Four Paws permission to remove Kaavan, who Sri Lanka gifted to Pakistan 35 years ago, when he was a baby, according to the organization.

Early Monday local time in Pakistan, Free The Wild, a charity Cher co-founded, wrote on Instagram that Kaavan was being loaded onto a plane and beginning his journey to Cambodia.

Before the flight, specialists from Four Paws trained the elephant for the small enclosure and loud noises he’d experience on the flight, using bananas and other treats.

Non-profit Cambodia Wildlife Sanctuary said in a Facebook post that Kaavan will now live in a huge jungle enclosure, where most of his food will be provided naturally — although he’ll also get fruit treats to “satisfy his sweet tooth.” Three other elephants live at the sanctuary.

Cher found out about Kaavan from people on Twitter, according to a statement from the Smithsonian Channel, which is producing a documentary on the elephant’s story.

“I thought, ‘how can I fix this? How can I save an elephant who’s been shackled to a shed for 17 years and who is a thousand miles away?’,” Cher said. “This is Free The Wild’s first big rescue and I am so proud.”

Ahead of his trip, Cher traveled to Pakistan and serenaded Kaavan with the song “A Dream is a Wish Your Heart Makes.”

On Friday, after meeting Pakistan’s Prime Minister Imran Khan, she tweeted her thanks to him “for making it possible for me to take Kaavan to Cambodia.”

A statement from the Prime Minister’s office said former cricket star Khan had thanked Cher, and invited her to participate further in environmental initiatives in Pakistan.

What we won’t see at this year’s inauguration