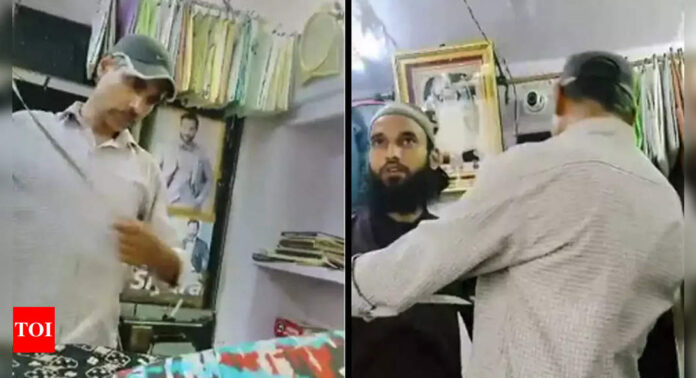 In this combo image, Kanhaiya Lal, a tailor works at his shop before he was attacked by an assailant with a sharp weapon while the other filmed the crime (File photo: PTI)

JAIPUR: The NIA on Wednesday arrested Udaipur resident Wasim Ali, the sixth suspect to be held for the beheading tailor Kanhaiya Lal Sahu in his shop on June 28. He was produced before a special NIA court in Jaipur and sent to police custody till July 12.
Sources said Wasim worked at a store close to Lal’s tailoring shop in Udaipur. Wasim had allegedly met and conspired with the two main accused – Gaus Mohammad and Mohammad Riyaz – who had admitted in a video to have beheaded Sahu for backing BJP’s Nupur Sharma. Before Wasim, NIA picked up Mohammad Mohsin on Tuesday for allegedly helping Gaus and Riyaz. Suspected “co-conspirators” Mohsin Khan and Asif were held later for alleged recces of the tailor’s shop.
Meanwhile, the Rajasthan cabinet, in a meeting headed by CM Ashok Gehlot, decided on Wednesday to relax rules and give government jobs to both the sons of Kanhaiya .