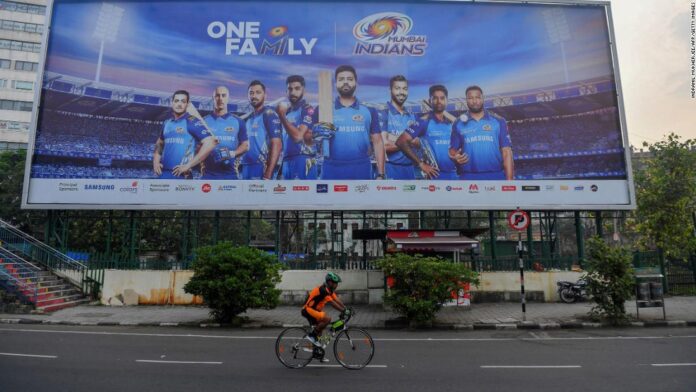 Those circumstances explain the unease she has sometimes been feeling while watching the Indian Premier League (IPL), the country’s most lucrative sporting competition which has continued even as the number of coronavirus deaths mount. On Thursday, India reported almost 380,000 new infections — another global record for the highest single-day case count — and 3,600 deaths.
“I just recovered from Covid 10 days ago and every next family that you hear, so many people in their family, friends, they’ve been losing people,” Anand Patil, who runs a design and advertizing company in Mumbai, told CNN Sport.

“A couple of my friends we lost; we keep hearing of families who needs urgent support.”

Despite the withdrawal of several high-profile players and calls for a postponement, the IPL, which attracts the world’s best cricketers on big-money contracts, is about to enter its fourth week of play.

“On some days, I’m in the mood to watch (the cricket) because it’s a respite from what’s going on. We are all locked at home, it’s a way for a family to bond together and spend good time together, especially in the lockdown when you can’t get out,” Anand Patil added.

The IPL is operating under strict bubbles as teams move between games across the country; for Sunrisers Hyderabad players, that even meant wearing head-to-toe PPE for an internal flight to Delhi.

This week, a number of top players, including India international Ravichandran Ashwin, have stepped away from the tournament.

“My family and extended family are putting up a fight against Covid-19 and I want to support them during these tough times,” Ashwin wrote on Twitter. “I expect to return to play if things go in the right direction.”

Australian star Pat Cummins, the most expensive foreign buy in the IPL’s 2020 auction, earned plaudits this week when he donated $39,000 (50,000 Australian dollars) towards medical supplies in India. A number of other current and former players — including Sachin Tendulkar and Brett Lee — and teams like the Rajasthan Royals and the Delhi Capitals have also made donations towards Covid-19 relief efforts.

But questions are being raised about whether the game’s administrators could be doing more given the impact Covid-19 is having in India.

“This is the sport we love, the IPL for sure brings a lot of smiles and distraction in the most challenging times,” KK Ramachandran, an educator based in Coimbatore and an ardent cricket fan, told CNN Sport.

“I have no judgments on the IPL’s scheduling, but personally, I think all the sponsors, teams and organizers could have got much bigger branding points if they had focused their attention and energies on what is without a doubt one of the biggest crises humanity has faced.”

Anand Patil also said the game should be doing more to address the pandemic: “Everyone can come together and just make it feel a little better, and maybe they can donate a part of the profits for what is required in India now … oxygen and beds and what we really need at this moment.”

The ICC, international cricket’s governing body, and the BCCI, the governing body for cricket in India, did not respond to CNN’s requests for comment.

In an email quoted by the Guardian, Hemang Amin, the interim chief executive of the BCCI, said the organization “‘understand(s) that there are (a) few apprehensions and concerns regarding the general situation in India and the withdrawals of certain cricketers.'”

Addressing the players, Amin went on to say: “‘While you go about playing the sport we all love, you are also doing something really important … When you all walk out on to the field, you are bringing hope to millions of people who have tuned in. If, even for a minute, you can bring a smile on someone’s face, then you have done well. While you are professionals and will play to win, this time you are also playing for something much more important … humanity.'”

According to Forbes, the IPL is the sixth most valuable sports league in the world, behind the NFL, the Champions League and the four biggest domestic soccer competitions in Europe. Delaying or canceling the tournament, some have argued, would come at a cost.

“We are talking about a huge economic system here. By stopping the IPL what do you do? You plummet the nation into more gloom, talk about more debts and more pandemic.”

The success of the IPL has been driven in no small part by the game’s cricket-mad fan base in India.

“It is a common ground that brings everyone together, across regions, socio-economic class, religion or sect. It is India’s adhesive and anti-depressant.”

Given the popularity of the sport and its star players (Indian captain Virat Kohli, for instance, boasts close to 200 million followers across Instagram, Facebook and Twitter), the IPL holds a commanding platform amid India’s public health crisis.

“We are into our vaccination drive and there is a significant anti-vaxxer lobby just like anywhere else in the world,” Majumdar said.

“Use the IPL as a platform to spread the right message, of vaccination, of hygiene protocol, of wearing masks and everything else.”

One such example is Delhi Capitals’ Ashwin, who has been tweeting about plasma donations to support Covid-19 patients to his 10.3 million followers.

He has also changed his profile name, so it now carries a simple message: “Stay home stay safe! Take your vaccine.”