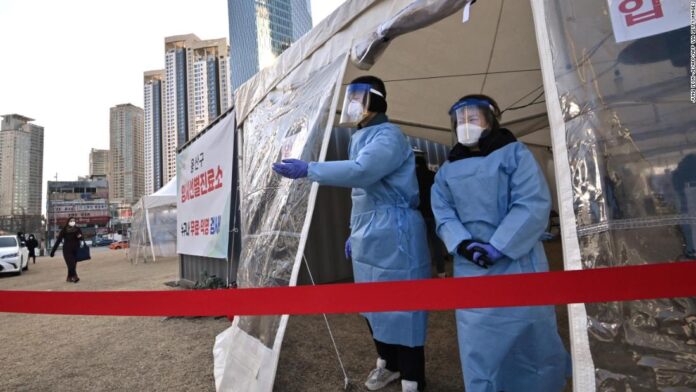 The ruling, which came into force Wednesday, required all foreign workers in the capital to undergo coronavirus screenings, or face fines of up to 2 million Korean won ($1,775).

In a news release from the city government Friday, Seoul City officials said they would now only recommend foreign workers employed at high-risk businesses with dense and unventilated working environments undergo testing by March 31. The city also recommended South Korean nationals working at the same businesses get tested, the release added.

The policy has already been brought into place in neighboring Gyeonggi province as well as several other cities and provinces. It is not clear whether other provinces will follow Seoul’s steps.

The policy had been labeled by many as xenophobic and discriminatory, with ruling party lawmaker Lee Sang-min describing it as an “unjust racist action against foreigners” and warning that it would result in “international embarrassment.”

Seoul City officials had previously denied the policy was discriminatory, pointing to statistics showing the proportion of foreign residents among confirmed Covid-19 cases in the capital had jumped from 2.2% last year to 6.3% this month. “I ask for people’s participation and think of this as a measure to protect the individual’s safety rather than discrimination,” said Seoul City official Song Eun-cheol earlier Friday.

The ruling had threatened to create something of a diplomatic incident, however, with a growing list of nations, including the United States and United Kingdom, voicing their opposition.

British ambassador to South Korea Simon Smith posted a video to Twitter Thursday in which he said, “we consider these measures are not fair, they are not proportionate, nor are they likely to be effective.” Smith said he had also raised the issue with South Korea’s National Human Rights Commission.

Canada’s ambassador Micheal Danagher retweeted the post, saying he and other ambassadors were making similar representations. Rebukes by ambassadors to the government of their host nation are rare, although the embassies stopped short of advising their nationals to not follow government rules.

The US Embassy in Seoul also tweeted Friday, “We have raised our concerns with senior level Korean authorities and are advocating strongly for fair and equitable treatment of all US citizens in our shared efforts to stop the pandemic.”

Both Seoul City and South Korean health officials had previously avoided direct questions about the epidemiological reasons for testing foreigners but not their Korean colleagues.