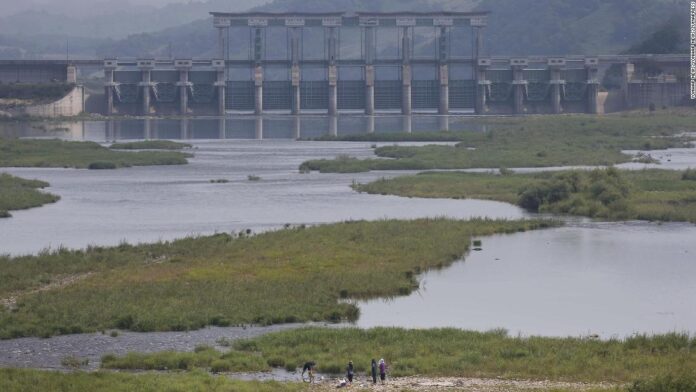 The water level at a bridge on the river in the South’s border county of Yeoncheon surpassed 1 meter (about 3.3 feet) on Monday afternoon, government data showed, requiring visitors on the riverbank to evacuate.

“North Korea appears to have released water from its Hwanggang dam,” said an official at South Korea’s unification ministry, which handles inter-Korean affairs.

Yeoncheon county said it had sent alarm messages to nearby residents, warning them to move to a safer area.

It was not immediately clear how many people had to leave after the suspected water release.

“The water level is now decreasing after hovering over 1.6 meters (5.2 feet),” a Yeoncheon county official said.

North Korea has been stepping up efforts to prevent flood damage from recent heavy rains.

South Korea has repeatedly urged the North to give notice before releasing water from the dam, as the river flows through Yeoncheon, but Pyongyang has remained unresponsive.

In 2019, North Korea released water from the dam without warning, resulting in flash flooding downstream that killed six South Koreans. Afterward, officials from the two countries met to discuss the issue, with the North Korean delegate expressing regret for the deaths and condolences to the families affected.