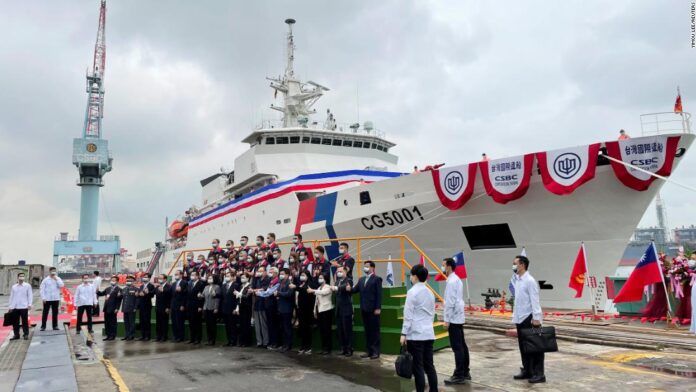 The civilian-run coast guard, which would operate as a branch of Taiwan’s navy during wartime, is often involved in confrontations with Chinese fishing and sand-dredging ships which Taiwan says operate illegally in its waters.

Chinese-claimed Taiwan has termed these as “gray zone” tactics designed to subdue the island, seeking to wear Taiwan down with repeated drills and activities in or near its airspace and waters.

Attending the commissioning of the domestically-made $100.52 million (T$2.8 billion) Chiayi in the southern city of Kaohsiung, President Tsai Ing-wen said the word “Taiwan” in English will be gradually printed on all coast guard vessels.

This “demonstrates our determination to defend the blue territory of the Republic of China”, Tsai said, using Taiwan’s formal name.

“We will defend our sovereignty and fishing rights,” he said.

The 4,000-ton Chiayi is the coast guard’s largest ship.

The vessel has three high-pressure water cannons, which the coast guard uses in encounters with Chinese fishing boats and sand dredgers that illegally operate in Taiwanese waters, as well as a multiple rocket launcher system and machine guns.

In a report to Parliament this week, Taiwan’s Ocean Affairs Council, which oversees the coast guard, said China is aggressively expanding its maritime militia, seeking to create “gray-zone conflicts” in the region.

“As long as they dare to cross the border, we will arrest them,” Hsieh said, referring to Chinese militias disguised as fishing boats.

The Chiayi is part of government plans to counter the growing Chinese threat, which also includes a target of building 141 new coast guard ships by the end of 2027, it said.