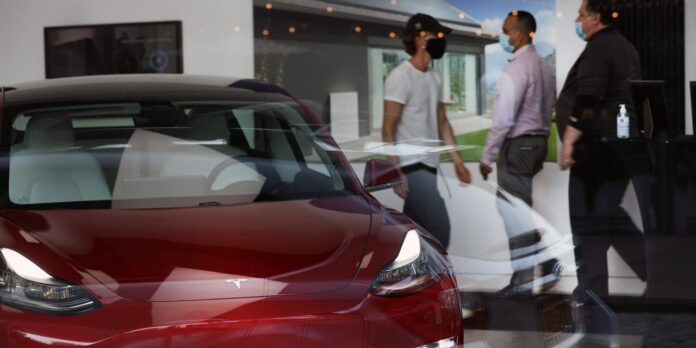 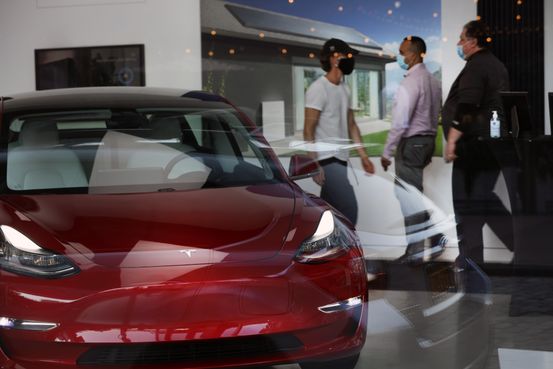 The Silicon Valley car maker has enjoyed booming sales, driven by both its popular Model Y compact sport-utility vehicle and sustained demand in China. The company also has benefited from the wider embrace of plug-in cars as governments across the world push to phase out gasoline-powered vehicles, in some cases through subsidies.

“We’ve seen a real shift in customer perception of electric vehicles, and our demand is the best we’ve ever seen,” Chief Executive Elon Musk said Monday on an investor call.

Tesla on Monday said revenue in the first quarter jumped around 74% from the same period a year earlier to $10.4 billion. The company generated a $438 million net profit, up from $16 million a year ago. Wall Street on average expected the company to report sales of about $10.5 billion and net income of around $509 million for the January through March period, according to analysts surveyed by FactSet.

Tesla said it delivered 184,877 vehicles in the first three months of the year, more than double the number during the same period a year earlier. The company, which delivered nearly half a million vehicles in 2020, reaffirmed it expects that figure to rise more than 50% this year.

The company’s strong financial start to the year comes as it faces challenges on other fronts. Federal auto-safety officials are investigating the fatal fiery crash of a Model S sedan earlier this month in Texas. Neither of the victims was found in the driver’s seat, local officials have said. The National Highway Traffic Safety Administration’s probe of the wreck is one of more than two dozen investigations of crashes involving Tesla vehicles.

The crash left questions about whether or how the vehicle could have been operating without anyone in the driver’s seat.

A Tesla executive said the company was working with local and federal authorities to investigate what happened.

The car’s steering wheel, he said on the call, was found to be deformed, “leading to the likelihood that someone was in the driver’s seat at the time of the crash.” He didn’t provide details about how the company came to that conclusion. All the seat belts, post crash, were found to be unbuckled, he said. Tesla wasn’t able to recover data from the car’s memory device.

Tesla conducted a study along with authorities in which the company tried to replicate the likely crash scenario, the executive said. The company said that a driver assistance feature that helps with steering didn’t engage in the test, while another feature, adaptive cruise control, only activated when a driver was buckled in and traveling at above 5 miles per hour.

What do you find most meaningful in Tesla’s quarterly report? Join the conversation below.

Mark Herman, the constable whose precinct the crash happened in, declined to comment on Tesla’s statement that someone likely was in the driver’s seat at the time of the crash, saying that the incident remained under investigation.

Tesla has also faced parts shortages that led the company to briefly shut down its Fremont, Calif., factory in February. Rivals such as

have had to idle some production capacity because of a global semiconductor shortage.

“We were able to navigate through global chip-supply shortage issues in part by pivoting extremely quickly to new microcontrollers,” the company said in a note to shareholders, adding that it also was devising new software for chips made by new suppliers.

Mr. Musk said the past quarter “had some of the most difficult supply chain challenges that we’ve ever experienced.” Those go beyond computer chips, he said. China production was held back because key engineers couldn’t travel there because of Covid-19 related quarantine restrictions, he said. Some of the effects are likely to last in the current and following quarter, he said.

Tesla said it had successfully lowered the cost of making cars, helping offset a decline in the average price of its vehicles.

The company’s bottom line also benefited from several factors not directly linked to car sales. Its financial results have been aided by the sale of regulatory credits to rival auto makers that need them to comply with emissions-related rules. Such credits brought in $518 million in the most recent quarter, up from $354 million during the year-earlier period. Tesla has previously said it doesn’t expect such sales to be a material part of its business.

The company also said it saw a positive earnings effect from the sale of bitcoin in the period. Tesla bought $1.5 billion worth of the cryptocurrency in the first quarter and sold 10% of that, Chief Financial Officer Zach Kirkhorn said. The company is now accepting bitcoin as payment for products sold in the U.S.

Mr. Kirkhorn said the company opted to invest in bitcoin when it was looking for a place to store cash it didn’t immediately need as a way to preserve liquidity while also earning a return. “It is our intent to hold what we have long-term and continue to accumulate bitcoin from transactions from our customers as they purchase vehicles,” he said on the investor call.

Tesla’s success in popularizing electric vehicles transformed the company into the world’s most valuable car maker. Its success also spurred legacy car makers and startups alike to develop competing models, some of which are showing early signs of eroding Tesla’s market share.

In the U.S., for example, Tesla vehicles accounted for roughly 70% of the all-electric vehicles sold in the first quarter, according to the research firm Cox Automotive Inc. That is down from about 82% during the same period a year earlier.

Tesla’s stock soared more than eightfold last year. It is up roughly 4.5% in 2021 after advancing 1.2% on Monday ahead of results. The stock retreated more than 2% in after-hours trading.

Global demand for electric vehicles continues to increase, though, and Tesla is adding production capacity to keep pace. The company said it remains on track to begin producing vehicles this year at its new car plants near Austin, Texas, and outside Berlin, its first in Europe. Tesla has expanded capacity at its first overseas plant in Shanghai and began delivering China-made Model Y vehicles this year after kicking off with the Model 3 sedan in 2019.

China has been a growth engine for Tesla, helping to lift the company to its first full-year profit last year. But the company has hit a rough patch in the market recently. Chinese authorities summoned Tesla in February over consumer quality complaints. The government also restricted the use of Tesla vehicles by military personnel as well as employees at key state-owned companies over data-security concerns.

Earlier this month, a single protester with a disputed claim about the safety of Tesla’s vehicles drew widespread attention across the Chinese internet, which is closely controlled by the government.

Tesla has apologized for its treatment of some customers in China and said it would do better. Mr. Musk said last month that Tesla would be shut down if it used its vehicles to spy, which he said was “a very strong incentive for us to be very confidential.”

Tesla also reaffirmed that it expects to deliver its first semitrailer trucks to customers in 2021, two years after initially planned. Mr. Musk said in January that the company didn’t have enough battery cells to go into production with the vehicle.

Write to Rebecca Elliott at rebecca.elliott@wsj.com