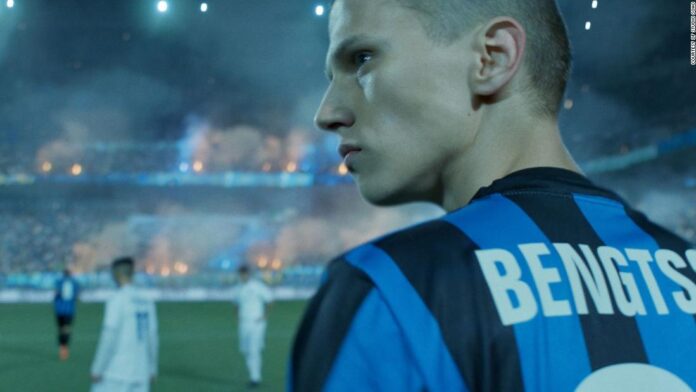 “Tigers” ends triumphantly because Martin Bengtsson — the protagonist whose real-life story the film is based on — survives.

But in Milan, his dream and career unraveled. After nine months in Italy, Bengtsson developed depression in the aftermath of an injury and attempted suicide by slitting his wrists in the shower.

He was sent back to his native Sweden to recover, never returned and retired from football a year later at the age of 18.

Encouraged by his therapist, Bengtsson began writing to process his experiences in Milan and to quash rumors that he left after becoming involved in drugs.

“I was angry at what had happened and that can be a big, big drive in writing,” he tells CNN Sport.

“And while I was doing it, I also realized more and more that this is the story that’s missing. No one had told it from the inside.”

When Bengtsson published his memoir “In the Shadow of San Siro” in 2007, it was one of the first accounts of its kind, even FIFPRO — the worldwide players’ union — did not begin conducting studies into mental health until 2013.

After Bengtsson published his book, he moved to Berlin where he met filmmaker and writer Ronnie Sandahl in 2011 and the two became good friends.

“I knew Ronnie was a very, very good writer — one of the greatest in his generation,” Bengtsson says. “And so I knew that … it would be a good movie … I believed in him.”

Nine years later, Sandahl translated Bengtsson’s story onto the screen as “Tigers,” which will be released in UK cinemas on July 1.

Sandahl’s film has drawn critical acclaim and was submitted as Sweden’s entry for the Best International Feature Film at the Oscars last year.

The film’s title references how caged animals are kept as tourist attractions, and cage-like motifs are scattered throughout the film.

Metal bars seem to follow Sandahl’s representation of Bengtsson wherever he goes: on his dormitory window, in nightclubs and even the stadium itself becomes a cage of sorts.

“It’s true to the essence of this boy fighting to fulfill his dream, being trapped in the dream and trying to find a way out somehow,” Bengtsson says, recalling his younger self.

‘Football is all he is’

Part of the turmoil depicted in the film is Bengtsson’s struggle to redefine his identity which was entirely dependent on football.

Such was its importance that football proved to be the code with which actor Erik Enge understood and interpreted the character.

“I had this fantastic personal trainer who basically just built my body to look like a football player,” Enge tells CNN Sport.

“Rather than just the mental way of reading a script … I was able to get into Martin’s head through physical work.”

Bengtsson’s routine, as well as his identity, revolved around becoming a professional footballer.

He would follow his own training schedule for three hours a day, alongside playing at his club.

This tension between becoming the best individual player, or the best team player, shaped Bengtsson’s relationship with his teammates, in the film and in real life.

Less than 1% of players who join academies at the earliest possible opportunity, at nine years old, become a professional footballer, according to ESPN.

So close to a professional contract and to beating the odds, the film depicts competition between teammates as far outstripping competition with their opponents.

“In the end, it’s all about yourself and your career, even though you’re in a team,” Sandahl tells CNN.

Bengtsson’s book and Sandahl’s film expose a side of football that is not normally spoken about.

“The world of football almost works as a funhouse mirror for topics like masculinity or capitalism,” Sandahl says. “It’s practically a world where you buy and sell humans.”

The market of young footballers is a multi-billion-dollar industry.

A study by the CIES Football Observatory found that English clubs alone collected more than $2.17 billion between July 2015 and February 2022 from the transfer of players who had graduated from their youth academy having been at the club for at least three years.

Such vast sums of money can somewhat obscure how young these players are.

“I’ve heard … from people who’ve seen the film that they can’t watch a game the same way anymore because they suddenly see boys down there who are pretty young and they’re suddenly becoming human beings,” Sandahl says.

Although Bengtsson’s story took place in 2004, the film is set in the present day against the backdrop of social media.

Social media, combined with the injection of even more money into football, tempers potential gains made regarding mental health in recent years, Bengtsson suggests.

“Now, [young footballers] are in the spotlight in a whole other way today,” he says. “So I think even though we talk about it more, the challenges have kind of outgrown it.”

According to a 2015 study by FIFPRO, 38% of active professional footballers disclosed that they have experienced symptoms of depression.

Football’s governing bodies have implemented some changes in an attempt to improve players’ mental health.

Under its regulations for the 2021/22 season, the English Premier League mandated that a Category 1 Academy — the name given to nearly all Premier League and several Championship clubs — employ at least one full-time psychologist. e

Club owners and coaches, however, can do far more to alleviate the pressures faced by young players by better educating themselves about the “psychological level in sports,” Bengtsson says.

“[They can start] to see how this enormous pressure … that you work for so much money and how that affects [you]. Or just to step into an arena and have that massive crowd looking at you. What does that do to a person?

CNN has reached out to FIFA and Inter Milan for comment.

‘The cost at the end’

These issues are not unique to football. Last year, Naomi Osaka and Simone Biles withdrew from the French Open and several events in the Tokyo Olympics respectively to prioritize their mental health.

Tennis and gymnastics feature in two of Sandahl’s other films, “Borg vs McEnroe” and “Perfect,” which he views as a loose trilogy in conjunction with “Tigers,” exploring the psychology behind sports stars.

They each unpack the “tremendous pressure” faced by young athletes in their pursuit of greatness, and Sandahl sees similarities across each discipline.

“It’s a world that encourages extreme human beings to go all the way despite a very high cost and then [the athletes] are left alone with that cost in the end,” Sandahl says.

“Because everyone who is encouraging these young athletes to go all the way, they’re not there when they’re out of the spotlight.”