From pictures of coffee dates with her husband, cricketer Virat Kohli to videos of her Sunday brunches, Anushka Sharma is a true foodie and loves to flaunt it. On Saturday, she began the weekend by sipping on some creamy coffee. And, this was no ordinary coffee but had the faces on Virat and Anushka on it. Clearly thrilled at the prospect of having her face designed on the coffee along with Virat’s, Anushka wrote, “We are so delicious.” She was also seen enjoying a macaron with her drink. 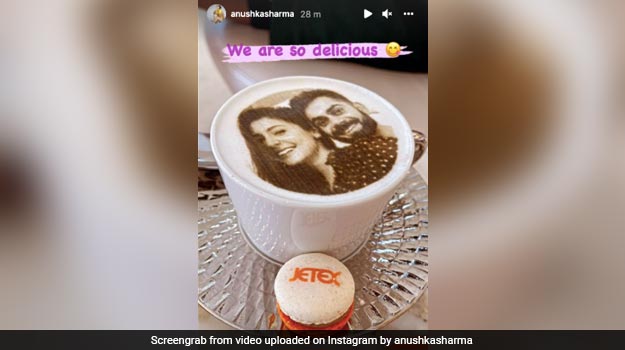 The coffee has their faces on it!

It is no surprise that Anushka Sharma swears by her coffee. The actor-producer cannot begin her day without a fresh cuppa. And, now, we have proof. Recently, Anushka shared an Instagram Stories in which she opened up about her love for the beverage. She wrote, “When the first of your 2 daily doses of coffee is over,” with a teary-eyed emoji. “Oh and, Morning fellas,” she added. In another post on Instagram, the actress also confessed her love for the drink and said, “Coffee makes me very optimistic. I love coffee. Thank you for listening.” Read about her love for coffee here.

And, sometimes, Anushka Sharma also loves pairing her coffee with some delicious snacks. Once, we saw her dig into not one but two yummy stuffed buns. Of the two, one bun had a white cream filling along with black and white sesame seed topping. The other had a rich chocolate stuffing that looked oh-so-yummy. Sharing the image, the actress joked, “Continuing on my health mission.” Read about it here.

And, when Anushka Sharma was in England along with her husband Virat Kohli and the Indian cricket team, she also followed the English tradition of high-tea. On one such occasion, the actress enjoyed hot tea and some scones. Sharing a picture, she wrote, “Tea and scones on a rainy English Summer Day.” Check it out here.

We love Anushka Sharma’s candid posts and can’t wait to see what is on her plate next. Can you?