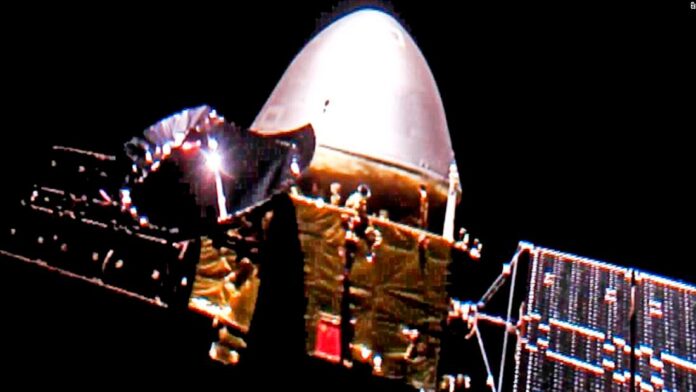 Tianwen-1, whose name means “quest for heavenly truth,” is made up of an orbiter, lander and a six-wheeled rover carrying scientific instruments, according to the China National Space Administration (CNSA.)

The CNSA said it will gather important information about Mars’ geological structure, atmosphere, environment and soil, and search for any signs of water. The spacecraft is expected to land on the planet’s surface in May or June.

The Tianwen-1 makes China the sixth country in history to reach Mars.

All three missions launched around the same time due to an alignment between Mars and the Earth on the same side of the sun, making for a more efficient journey to the red planet.

NASA’s Perseverance rover is expected to land on Mars on February 18.

So far, the United States and the former Soviet Union are the only two countries to land a spacecraft on the surface of Mars. But the European Space Agency and India have previously sent spacecraft to enter the planet’s orbit — and on Tuesday, the UAE joined their ranks, with its Hope Probe successfully entering orbit.

With Tianwen-1, China is the first nation to attempt sending both an orbiter and a rover on its first homegrown Mars mission. According to the scientific team behind the mission, the probe will “orbit, land and release a rover all on the very first try, and coordinate observations with an orbiter.”

By contrast, NASA sent multiple orbiters to Mars before ever attempting a landing, since pulling off the landing is a far more difficult task.

The Chinese rover is expected to stay for three months, with the hope that it can gather important information about the planet.

Wednesday’s news marks the latest success for China’s ambitious space sector, which has transformed rapidly in the past few decades.

Though Chinese authorities and state media have hailed Tianwen-1 as the country’s first mission to Mars, that isn’t quite true.

China’s first attempt to reach Mars was actually in 2011 with the Yinghuo-1 probe, which was supposed to orbit the red planet and study its environmental structure. It launched from Kazakhstan in tandem with the Russian Phobos-Grunt mission in November that year.
But the mission failed, with a malfunction that stranded the probe in Earth orbit’s shortly after launch. In 2012, the spacecraft re-entered the Earth’s atmosphere and fell back to Earth, landing in the Pacific Ocean.

It was a disappointing blow to the country’s young space program, which has historically lagged behind other countries. Beijing only launched its first crewed space flight in 2003, more than 40 years after NASA’s achievement.

But all that has changed in recent years.

Under President Xi Jinping, who took office in 2013, China has invested billions of dollars into its space program, fired space labs and satellites into orbit and landed three unmanned spacecraft on the moon.

As well as the Tianwen-1 Mars mission, Beijing is also planning to launch a permanent space station by 2022, and is looking at sending astronauts to the Moon — possibly in the 2030s.