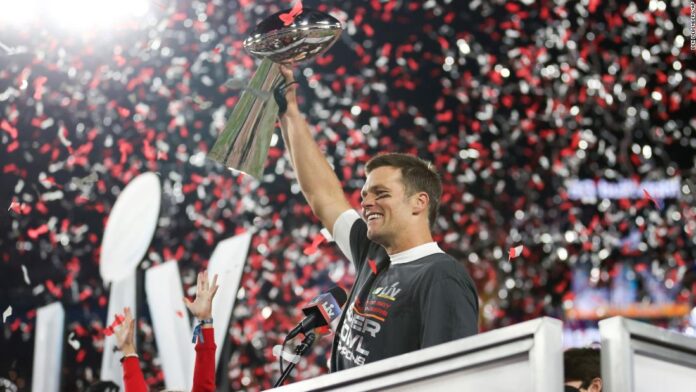 In the NFL however, there is only one man: Tom Brady.

Not only did Brady further extend his own record of the most Super Bowl rings won by a player — he now owns more Lombardi Trophies than any team franchise, one clear of both the New England Patriots and Pittsburgh Steelers — but after being named Super Bowl MVP yet again, he became the only player in NFL history to win the award five times.

And after putting in arguably his most complete performance of all his 10 Super Bowl appearances — throwing three touchdowns, including two to former Patriots teammate Rob Gronkowski — athletes from all sports took to social media to laud Brady’s legacy.

His former Patriots teammate Julian Edelman called him: “The best ever in all sports.”

Four-time NBA champion James even went as far to refer to it as “TOMPA BAY,” before praising Brady’s longevity.

Brady signed for the Buccaneers prior to this season having spent 20 successful years with the Patriots, winning six titles.

And in his debut season with his new team, he helped transform the Bucs, taking them to US sport’s biggest game for the first time since the 2002–03 season, in which they beat the Oakland Raiders at Super Bowl XXXVII.

“Every year is amazing,” Brady said after overcoming rival quarterback Patrick Mahomes on Sunday. “This team is world champions forever. You can’t take it away from us.”

Touchingly, Brady’s former team made clear their position on the GOAT debate.

Paris Saint-Germain and Brazil superstar Neymar called Brady a “legend,” while Portland Trail Blazers guard CJ McCollum suggested the NFL might have a naming decision to make if Brady keeps up his success.

“I wonder if Tom is going to win back to back. Get 8 chips. Retire and have the NFL call it the Tom Brady instead of Vince Lombardi,” tweeted McCollum.

In winning with his new team, Brady joined Hall-of-Famer Peyton Manning as the only starting quarterbacks to win Super Bowls with multiple franchises.

The concern for other NFL teams is that Brady doesn’t look like he fancies stopping anytime soon. “We’re coming back,” Brady said. “You already know that.”

In a season that has looked like no other — with limited fans permitted in stadiums and players and coaches wearing masks on the sidelines — it is perhaps comforting to see a familiar sight at the end of it: quarterback Brady hoisting the Lombardi trophy.