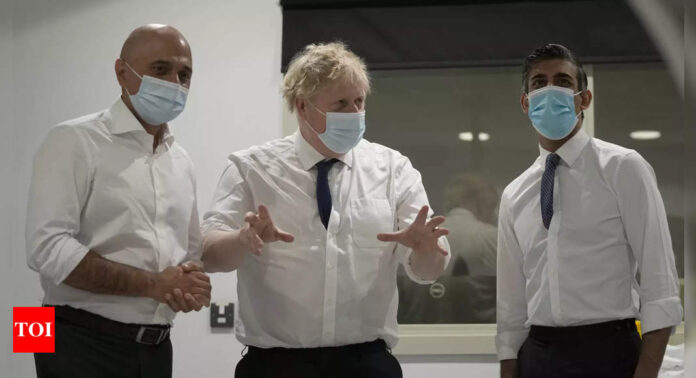 LONDON: The UK Prime Minister Boris Johnson’s government was on the brink of collapse on Tuesday night after Chancellor of the Exchequer (finance minister) Rishi Sunak, who is Infosys co-founder Narayana Murthy’s son-in-law, and Pakistani-origin health minister Sajid Javid resigned from the government within half an hour of each other in what appeared to be a coordinated attempt to demonstrate no confidence by the cabinet in his leadership.
Both outgoing cabinet ministers published disparaging resignation letters on Twitter questioning Boris Johnson’s integrity and competence. Further resignations are expected with many speculating it will now be impossible for Johnson to carry on as PM.
Javid tendered his resignation first, just minutes after Johnson had apologised in a BBC interview for appointing MP Chris Pincher to a government role despite being briefed there had been a complaint against him from two-and-a-half years ago. He had earlier denied he was aware any allegations against Pincher. Pincher was suspended as a Conservative MP last week over allegations of sexual misconduct.
Vice-chairman of the Conservative party Bim Afolami resigned live on television on Tuesday night saying he could no longer serve under the PM.
Andrew Bridgen, one of the MPs who said he had declared no confidence in Johnson in last month’s confidence vote, told TOI: “Finally the cabinet have come to the conclusion many Tory MPs came to months ago. The whole cabinet is resigning and the government has fallen. Ministers are fed up of being asked to defend him on national TV. This is about Chris Pincher, Partygate and Boris lying.”
Javid, the outgoing health secretary resigned just after 6 pm local time. In his letter Javid wrote: “I can no longer, in good conscience, continue serving in this government. I am instinctively a team player but the British people also rightly expect integrity from their government. The tone you set as a leader, and the values you represent, reflect on your colleagues, your party and ultimately the country… It is three years since you entered Downing Street. You will forever be credited with seeing off the threat of Corbynism, and breaking the deadlock on Brexit… But the country needs a strong and principled Conservative Party, and the Party is bigger than any one individual. I served you loyally and as a friend, but we all serve the country first.”
Ten minutes later Sunak, the outgoing Chancellor of the Exchequer, handed in his notice which exposed simmering tensions with the PM. He wrote: “For me to step down as Chancellor while the world is suffering… serious challenges is a decision that I have not taken lightly. However, the public rightly expect government to be conducted properly, competently and seriously… I have reluctantly come to the conclusion that we cannot continue like this,” Sunak said.
“I recognise this may be my last ministerial job but I believe these standards are worth fighting for… I firmly believe the public are ready to hear the truth. They need to know that whilst there is a path to a better future, it is not an easy one. In preparation for our proposed joint speech on the economy next week, it has become clear to me that our approaches are fundamentally too different,” he said. He accused Johnson of not working hard, not making sacrifices, and not taking difficult decisions to achieve a low-tax, high-growth economy that has traditionally been the Conservative Party’s hallmark.
Labour leader Sir Keir Starmer said it was “clear this Tory government is now collapsing”. He said the PM had disgraced his office and let down the country. “He is not fit to govern the country,” Starmer said. He condemned both ministers for not resigning earlier and called for a general election.
When asked last week by Indian journalists if he wanted to be PM, Sunak had replied: “It says an enormous amount about Britain’s openness and tolerance that I am sitting here in the Treasury. We need to make sure that is not end of the British Indian story. There is lots more we can do and that is what I am really excited about in future.”