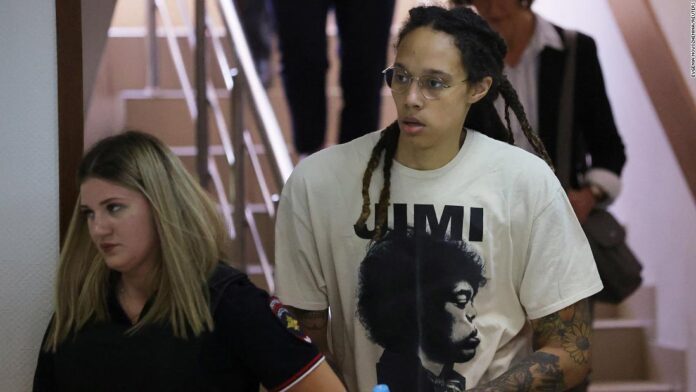 Griner, 31, a Phoenix Mercury player who plays in Russia during the WNBA’s off season, was arrested February 17 at a Moscow airport, a week before Russia invaded Ukraine.

Griner’s supporters and US officials say she is wrongfully detained and have called for her release as fears mount that she is being used as a political pawn amid rising tensions between Russia and the US.

At the trial, Griner was accused by a prosecutor of smuggling less than a gram of cannabis oil in her luggage.

“Being sufficiently aware that the movement of narcotic drugs is not allowed… no later than February 17, 2022 at an unspecified location under unspecified circumstances from an unidentified person [Griner] bought two cartridges for personal use, which contained 0.252 grams and 0.45 grams of hash oil, totaling 0.702 grams,” the prosecutor said, according to a TASS reporter in the hall of the Khimki City Court.

The prosecution argues that Griner intended to import the drugs into Russia’s territory and put the prohibited substances into a backpack and a suitcase, according to TASS. Cannabis oil is subject to control in Russia and is classified as a narcotic drug.

The second hearing of the trial will take place on July 7.

Some have speculated that Griner could be released in a prisoner swap, but over the weekend US Secretary of State Antony Blinken refused to comment on the matter.

Griner’s lawyers, Alexander Boykov and Maria Blagovolina, said on Friday they were unaware of any plans to exchange Griner for a Russian prisoner held in the US.

“We have no information about it, unfortunately,” the lawyers said during an impromptu press conference.

During the hearing, an employee of the Sheremetyevo airport customs services was one of the two witnesses, the lawyers said. He was interrogated on the circumstances of Griner’s detention and personal search, the lawyers said, adding that they could not disclose any of the information that he revealed during the testimony.

When asked why Griner refused to speak on the charges in court, the lawyers said: “She has the right to do so later.

US Embassy Charge d’Affaires Elizabeth Rood, who attended Friday’s hearing, reiterated that Griner had been “wrongfully detained,” adding that “the practice of wrongful detention is unacceptable wherever it occurs and is a threat to the safety of everyone traveling, working, and living abroad.”

She spoke to Griner in the courtroom. “She is doing as well as can be expected in these difficult circumstances and she asked me to convey that she is in good spirits and is keeping up the faith,” Rood said.

“The US government, from the highest levels, is working hard to bring Brittney and all wrongfully detained US nationals home,” she added.

Griner’s detention, which has been repeatedly extended, has sparked a wave of support among dozens of organizations in the US that have joined Griner’s wife, Cherelle, in urging President Joe Biden to strike an exchange deal with Russian authorities to release Griner and bring her home safely as soon as possible.

Speaking to CNN on Thursday, Cherelle Griner implored US officials to do more to secure her wife’s release.

“It’s really, really difficult. This is not a situation where the rhetoric is matching the action,” she said. “I do have to unfortunately push people to make sure that the things they’re telling me is also matching their actions and so it’s been the hardest thing to balance because I can’t let up. It’s over 130 days and BG’s still not back.”

Kremlin spokesperson Dmitry Peskov said the case is not politically motivated during a conference call with reporters Friday.

While the Kremlin cannot comment on the course of the trial, Peskov said, he emphasized that Griner was detained after carrying “illegal drugs that contained narcotic substances” which is punishable by the Russian law.

“Based on what I said, her arrest cannot be politically motivated,” Peskov added.

Griner was named an honorary WNBA All-Star Game starter last week, with the All-Star Game scheduled to take place on July 10 in Chicago. Her detention is still “tough on our team,” Phoenix Mercury head coach Vanessa Nygaard told reporters before the team’s game Monday against the Indiana Fever.

She expressed hope Griner will return home soon and that President Biden will “take the steps to ensure that she comes home.”