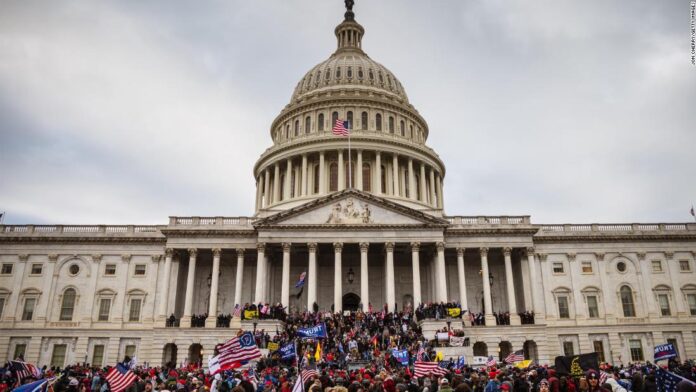 Rep. Zoe Lofgren described the radio broadcast, the existence of which was not previously known, during a House Administration Committee hearing on security failures around the January 6 attack.

In that transmission, according to Lofgren’s telling, the officer said: “Attention all units on the field, we’re not looking for any pro-Trump in the crowd. We’re only looking for any anti pro-Trump who want to start a fight.”

Lofgren, who chairs the committee, said she was quoting from an account of the radio call, which was found by the Department Office of Professional Responsibility during its ongoing review of allegations related to officer conduct on January 6. She did not identify the officer.

Neither Capitol Police nor Congress has released the audio of the broadcast, despite requests to do so.

But the Capitol Police in a statement Thursday said the call “has been misquoted and is lacking … necessary context.”

The department provided what it says is a transcript of the broadcast in question.

“With regards to pedestrian traffic on — on the grounds today, we anticipate a — a large presence for pro-Trump participants. What we’re looking for is any anti-Trump counter protestors,” the transcript reads, according to the USCP statement.

But the USCP statement also acknowledges that officers were instructed to look out for potential counter demonstrators on January 6 despite the fact that sources and public testimony about the events that day warned of potential violence from pro-Trump protesters.

“The radio call does not mean USCP was only looking out for anti-Trump counter protestors. The next radio transmission requests that officers be on the lookout for a pro-Trump protester carrying a possible weapon,” the statement adds, though the department did not provide a transcript of the subsequent broadcast.

Lofgren’s office did not immediately respond to CNN’s request for comment Thursday on the new USCP statement.

US Capitol Police Inspector General Michael Bolton said Wednesday he had not yet read internal reports from the investigation — which CNN reported last month involves allegations against 36 officers — but planned to do so once the review was completed.

Going forward, Bolton “will be able to review the radio transmissions, and he plans to review the findings in general and command and control communications, knowing now that there’s a specific allegation about those communications he should specifically look at it,” a committee aide said.

The committee aide added that Lofgren’s line of questioning underscores the point that the USCP, based on the available intelligence at the time, had ample reason to expect violence from pro-Trump protestors directed at the Capitol and lawmakers but “despite this and all the rhetoric online … USCP supervisors on the morning of 1/6 were apparently still advising their front line officers to focus on and prioritize anti-Trump protesters.”

While the Capitol Police says that neither radio transmission or the officer who made the call are under investigation, Lofgren’s revelation offers some rare insight into the kind of conduct from Capitol Police that has been cited in reports from of the ongoing probe.

A department spokesperson told CNN in February that six US Capitol Police officers had been suspended with pay for their actions in the January 6 riot. Of the 36 officers under investigation from January 6, 23 of the cases are complete. Thirteen of the cases remain under investigation, a department spokesperson told CNN last month.

One of the suspended officers took a selfie with someone who was part of the mob that overtook the Capitol, Rep. Tim Ryan, an Ohio Democrat, said at the time. Another wore a “Make America Great Again” hat and started directing people around the building, Ryan added.

Acting USCP Chief Yogananda Pittman said in January that the department “has been actively reviewing video and other open source materials of some USCP officers and officials that appear to be in violation of Department regulations and policies.”

This story has been updated with new statement from the US Capitol Police.