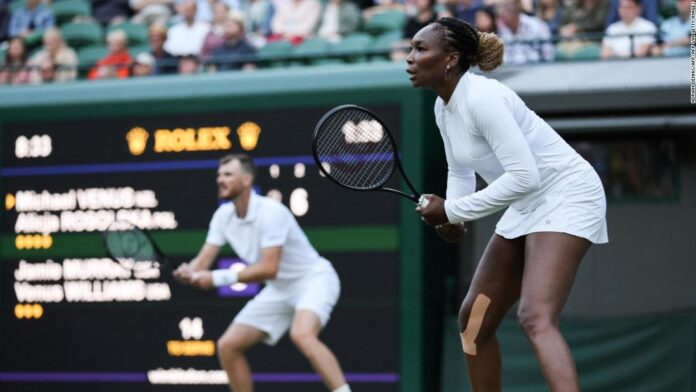 The 42-year-old has not played competitively for almost a year but has partnered up with Jamie Murray, brother of three-time grand slam champion Andy Murray, to compete in the mixed doubles.

Venus had previously expressed that she would not be participating this week, but requested a last-minute wild-card entry with Murray, and the pair was then announced in the mixed doubles draw on Wednesday.

The popular pairing, cheered on by the crowd, surprised even themselves when beating Alicja Rosolska and Michael Venus 6-3 6-7(7) 6-3 on Friday.

“I had no plan to play. I saw the grass and I got excited,” Williams said.

“I was at the French Open, it’s a beautiful event, but my heart didn’t beat the same way. Not that I could play but … I had no plans. That’s why I was asking (Murray) last minute.”

In her career, Williams has won the Wimbledon women’s singles title five times and the doubles title six times but she’s never managed to succeed in the mixed doubles — she lost in the final in 2006.

Her partner, Murray, has won five mixed doubles titles including two at Wimbledon in 2007 and 2017.

The pair seemed to click on Friday, with Murray dominating with his serve and Venus sharp at the net.

“It’s one of the only ones I haven’t won, so I usually put a little more priority here,” Williams added.

Just like her sister, 23-time grand slam champion Serena Williams, there is a sense that this could be one of the last times supporters will be able to watch Venus at Wimbledon. The 40-year-old Williams lost in her opening round match on Tuesday to France’s Harmony Tan.

But while she is not expecting to win every match, she says she’s just happy competing at the highest level again.

“It was definitely super last minute. Just inspired by Serena. Like I said, it was amazing. I just was so happy to have so much help today,” she said.

The pair will now face British duo Alicia Barnett and Jonny O’Mara in the round of 16 on Sunday.